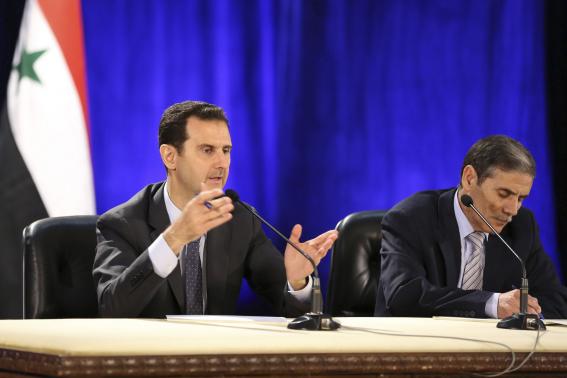 (Reuters) – President Bashar al-Assad said on Sunday that Syria’s three-year conflict was at a “turning point” due to his forces’ military gains against rebels, state media said.

Assad’s allies have portrayed him as confident and in control and they expect him to run for and win a presidential election in July – a turnaround from last year when he looked on the verge of defeat as rebels advanced towards Damascus, struck in the heart of the capital and took control of key areas.

Addressing graduate students and staff of the political science department in Damascus University: “(Assad) pointed out that there is a turning point in the crisis in Syria in terms of the continuous military achievements … by the army and armed forces in the war against terror and in … terms of national reconciliation,” state news agency SANA reported.

The government has also struck localized truces in districts in and around Damascus, ending sieges on rebel-held areas, many of which lasted for more than a year, causing severe hunger and death.

Assad is preparing to run for a third term in an election expected in July which international powers that back the rebels have described as a “parody of democracy”.

Last week, a former Russian prime minister quoted Assad as saying that he expected much of the fighting to be over by the end of the year. On the same day, the leader of Hezbollah was quoted as saying that the president no longer faced a threat of being overthrown.

The civil war, which started as a peaceful protest movement, has killed over 150,000 people, forced millions more from their homes, and seen the government lose control of swathes of northern and eastern Syria to Islamist rebels and foreign jihadis.

Assad has used tanks and warplanes to attack rebel-held areas and his opponents have accused him of using poison gas to force civilians in rebel-held territories to submission.

On Sunday, opposition activists said at least 20 people were killed when warplanes attacked Douma, a town near Damascus. A day earlier, rebels and the government blamed each other for an alleged poison gas attack on Kfar Zeita village in the central province of Hama that they said wounded scores of people.

U.S. ambassador to the United Nations Samantha Power told ABC’s “This Week” that the attack was so far “unsubstantiated”.

“But we’ve shown, I think, in the past, that we will do everything in our power to establish what has happened and then consider possible steps in response.”