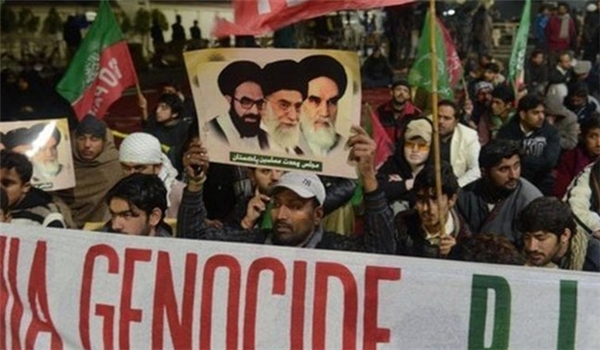 TEHRAN (FNA)- Protesters rallied in the Pakistani city of Karachi to protest continued attacks on Shiite Muslims in Pakistan.

The protesters and relatives of the victims on Sunday accused the Islamabad government of failing to provide security for Pakistan’s Shiite community, press tv reported.

At least nine Shiites have been killed in a series of attacks in the cities of Karachi and Quetta since Wednesday.

The demonstrators also called on the chief minister of Southern Sindh Province to step down over the killings.

The protesters also condemned the government of Prime Minister Nawaz Sharif for having “a secret deal” with Saudi Arabia and Bahrain to send mercenaries to the Arab states.

They also voiced outrage at the government for receiving a 1.5-billion-dollar financial aid from Saudi Arabia.

Islamabad says the aid is to help Pakistan’s economy, but the protesters dismiss the government claim.

“It is shameful that Nawaz’s administration is selling Pakistani foreign policy to the Saudi government. There is nothing as a free lunch and they are lying to us that Saudis gifted us 1.5 million dollars for free. They are recruiting Taliban for their wars,” a protester said.

Some protesters also accused Saudi Arabia of being behind the violence in Pakistan.

Pro-Taliban militants target the Shiite community in Pakistan on a regular basis, attacking doctors and lawyers as well as religious gatherings.

Shiite Muslims in Pakistan say the government must take decisive actions against the extremist Takfiri groups involved in the targeted killings.

Reports say the terrorist group of Lashkar-e-Jhangvi (LeJ) has been behind most of the attacks on Shiite Muslims in the country.

The killing of Shiites has caused an international outrage, with rights groups and regional countries expressing concern over the ongoing deadly violence.

Human Rights Watch has criticized Pakistan for its failure to protect Shiite Pakistanis, urging Islamabad to hold accountable those responsible for ordering and participating in the bloody assaults on the Shiite community.