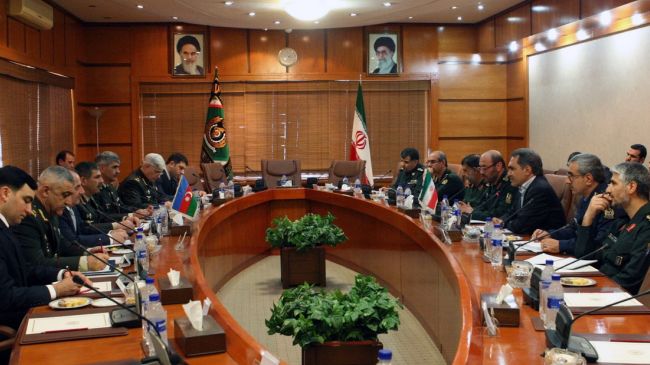 “Increased contacts and constructive interaction will lead to the establishment of complete security and calm on the two countries’ borders,” Dehqan said in a meeting with his Azeri counterpart Colonel General Zakir Hasanov in Tehran on Monday.

He added that the increasing threat of terrorism and extremism is the cause of instability and insecurity in the region.

The Iranian minister added that regional countries must place the rooting out of terrorism, violence and their causes on their agenda.

He warned regional countries that terrorism can spread in the shortest possible time and “if it is not dealt with decisively it will lead to the uncontrollable spread of instability and insecurity.”

The Iranian minister said regional and international cooperation is the only way to counter the serious threat of terrorism.

The Azeri defense minister, for his part, described Iran as an important friendly country for Azerbaijan, saying cooperation with Tehran is a foreign policy priority for Baku.

Hasanov threw his country’s weight behind Iran’s peaceful nuclear energy program and said Baku believes joint efforts by Tehran and the international community will lead to a final nuclear agreement.

Iran and the five permanent members of the UN Security Council – the US, France, Britain, Russia, China – plus Germany ended their latest round of talks in the Austrian capital of Vienna on April 9 aimed at reaching a comprehensive deal on the Islamic Republic’s nuclear energy program.

The two sides had reached an interim deal in the Swiss city of Geneva on November 24, 2013. The deal took effect on January 20.