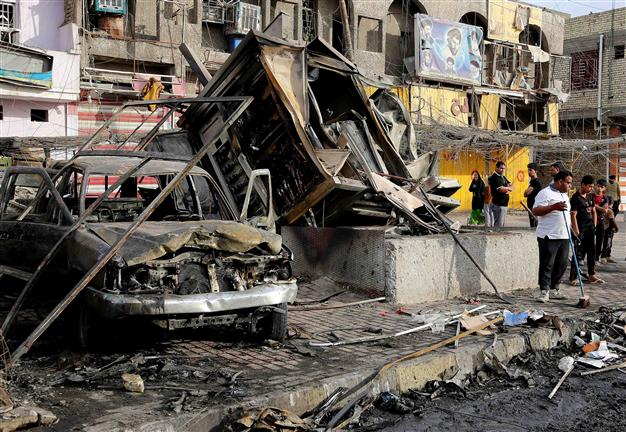 Iraqi civilians begin to clean up in the aftermath of a car bombing on a commercial street in Baghdad’s eastern neighborhood of Sadr City, Iraq, Friday, April 11, 2014. AP Photo

The latest violence comes amid a protracted surge in nationwide bloodshed that has claimed more than 2,550 lives so far this year and sparked fears of Iraq slipping back into the all-out sectarian killing of 2006 and 2007.

The unrest has been driven principally by widespread anger among the Sunni Arab minority over claims of mistreatment at the hands of the Shiite-led government and security forces, as well as by the civil war in neighbouring Syria.

The suicide bombing at the police checkpoint northwest of the city of Kirkuk also wounded 11 police officers.

Anti-government militants frequently target the security forces, some of whom are poorly trained and lacking in discipline.

In a village in the Sulaiman Bek area, also north of Baghdad, gunmen attacked a police officer’s house, killing his father and brother and wounding two more people.

The gunmen also shot dead a Sahwa anti-Al-Qaeda militiaman nearby.

Sulaiman Bek has been repeatedly attacked by militants, who have seized part or all of the area on several occasions.

Iraq’s first general election since American troops left at the end of 2011 will be held on April 30, in a major test for the security forces.

While they were able to keep violence to a minimum during last year’s provincial polls, the security forces have failed to halt a subsequent year-long surge in unrest.

More than 315 people have been killed since the beginning of this month, according to AFP figures based on security and medical sources.