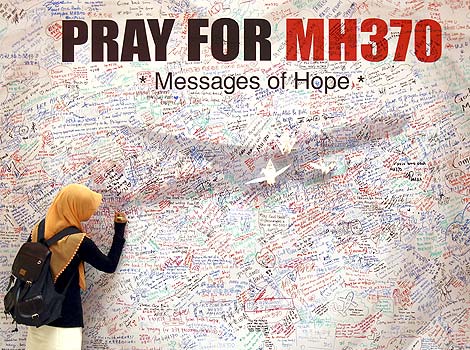 (CNN) — Australia’s Prime Minister on Saturday reiterated his “high degree of confidence” that acoustic signals picked up by searchers in the Indian Ocean are from the missing Malaysian plane’s black box.

But Tony Abbott warned that locating the flight data recorders beneath nearly three miles of water would be a “massive, massive task.”

“It is likely to continue for a long time to come,” he told journalists in China, where he is on a diplomatic visit.

He applauded his nation’s work in handling the operation, saying Chinese officials appreciate Australia’s “transparency and candor” in the search for missing Malaysia Airlines Flight 370.

“I think it’s to our country’s credit that we’ve approached it that way,” Abbott said.

Thirty-six days since the plane vanished, the search continues, unabated.

Up to nine military aircraft, one civil aircraft and 14 ships will assist in Saturday’s search for the airliner, Australia’s Joint Agency Coordination Centre said. The center of the 16,000 square-mile search area lies about 1,448 miles northwest of Perth.

The U.S. Navy commander leading the American effort to find Malaysia Airlines Flight 370 said he’s “optimistic” about how the search is proceeding.

The pings were continuous and consistent with what a black box would emit, said Cmdr. William Marks. “We’ve ruled out that it was anything natural, or anything from commercial shipping, or anything like that.”

“I agree with the Prime Minister,” Marks said. “We’re optimistic.”

On Saturday, searchers looking for pinger signals will continue to drag a towed ping locator at walking pace through the water in hopes of picking up a new signal, Marks said.

“We have to stick with the TPL for just a little while longer to make sure we have exhausted every ounce of power coming from the battery through the black boxes,” he said.

Once the signals cease, searchers will lower a sonar device, a Bluefin-21, into the ocean to scour for remnants of MH370.

The Bluefin’s pace is even slower and more painstaking than that of the ping locator, he said. That is why it is important to analyze more pings to narrow down its search area for the black boxes.

Over the past week, the ping locator towed by the Australian vessel Ocean Shield has picked up four pings have been detected.

It first picked up two sets of underwater pulses April 5 that were of a frequency close to that used by the locator beacons. It heard nothing more until Tuesday, when it reacquired the signals twice.

The four signals were within 17 miles of one another.

A fifth ping, detected Thursday by a sonobuoy dropped by an airplane, is “unlikely to be related to the aircraft black boxes,” Australian chief search coordinator Angus Houston said a day later.

The batteries powering the flight data recorders’ locator beacons are certified to emit signals for only 30 days after they get wet.

That has injected the search effort with a heightened sense of urgency.

The signal is “starting to fade, and we are hoping to get as much information as we can before the signal finally expires,” Abbott said Friday.

Tracking pings is only one early step in the hunt to find the plane’s data records, wreckage and the people aboard.

Families of the 239 people aboard when the plane disappeared from radar screens March 8 met Friday with Malaysia Airlines and government officials. They came away unpersuaded that progress was being made.

“Today, all they said was that they were confident,” family representative Steve Wang said. “But that really doesn’t mean that they have confirmed it. They didn’t use the word ‘confirm,'” he said.

“So it could be that it’s a real lead, but it could also not be. I think that, at the moment, everyone needs to wait for final, confirmed information.”

The sources said there was nothing unusual about his voice, which conveyed no indication that he was under stress.

A former colleague described Zaharie to CNN as “a very simple guy.”

“Being a commander, he always takes charge of his flight,” said Ismail Nasaruddin. “I don’t see any problems working with him.”