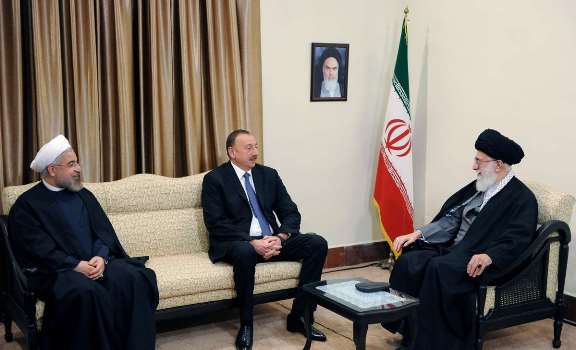 Tehran, Apr 9, IRNA – Supreme Leader of Islamic Revolution said in a meeting with visiting Azerbaijani President both countriesˈ officialsˈ political will and serious pursuing of reached agreements is needed to defeat the enemiesˈ sabotage against shared interests.

Ayatollah Seyyed Ali Khameneˈie in his Wednesday evening meeting with President Ilham Aliyev referred to the two countriesˈ neighborhood, as well as religious, cultural and historical ties as effective factors at the service of further strengthening of bilateral relations.

ˈThe relations between the two nations and the two governments should get stronger with the passage of each new day,ˈ added Ayatollah Khameneˈie.

The Supreme Leader of Islamic Revolution said the strengthening of the governmentsˈ relations with their nations and their religious beliefs guarantees their success.

His eminence added that there are some tendencies that are after promotion of religious extremism and sowing the seeds of discord among the followers of different Islamic schools of thought. ˈSuch tendencies should not be permitted to achieve their objectives, including disturbing countriesˈ national unity.ˈ added Ayatollah Khameneˈie.

The leader said that the talks held between the two countriesˈ presidents, the reached agreements and the establishment of a shared economic commission were desirable developments.

ˈThe current level of the two countriesˈ transactions is very low keeping in mind the two sidesˈ capacities and broad potentials and I hope this visit would serve as a prelude for a broad economic and regional cooperation,ˈ reiterated Ayatollah Khameneˈie.

Ayatollah Khameneˈie said that some, including the Zionist regime, are not pleased with the strengthening of relations between the Islamic Republic of Iran and the Republic of Azerbaijan and keep disrupting its process, but relying on serious and resolute political will such intrigues can face defeat.

In the meeting in the presence of the Iranian President Hassan Rouhani President Aliyev, too, expressed delight for visiting Iran and said that the atmosphere of the bilateral negotiations was very constructive.

ˈThe joint Iran -Azerbaijan commission began its activities right today and this visit will serve as a platform for the improvement of comprehensive relation, including in industrial, commercial, transportation, and tourism fields,ˈ he said.

The Azerbaijani president said that religious extremism and the need to counter it is among the shared serious concerns of both countries.

President Aliyev also referred to the historical and cultural relations between the two countries, stressing Bakuˈs strong and resolute will for expansion of comprehensive relations with Tehran.

The president of Azerbaijan said that the independent policies pursued by the Islamic Republic of Iran are exemplary both in the region and in the world.

ˈWe consider Iranˈs might as our own countryˈs might and regarding the strong ties between the two countries we will not permit the others to affect them negatively,ˈ he stressed.

Iran was one of the first countries to establish full diplomatic relations with Azerbaijan. Following the declaration of the Parliament of Azerbaijan to restore independence of Azerbaijan Republic on October 18, 1991 and in early December 1991, Iranian Foreign Minister Ali Akbar Velayati visited Baku, where he signed a number of agreements on political, economic, and cultural cooperation and pledged to support Azerbaijanˈs membership in the Organization of the Islamic Conference (now the Organization of Islamic Cooperation).

Within the few days after the visit, Iran recognized Azerbaijan on January 4, 1992, upgraded its consulate in Baku to establish full diplomatic relations.

Tehran was quick to recognize Azerbaijan as an independent state and set out to create amicable relations with a country similar to its own. Iran saw Azerbaijan as fertile ground for spreading its Islamic Revolution further.

Azerbaijan’s power is growing primarily because of the influx of oil and gas revenues emanating from the Caspian Sea. Recognizing this, Iran has sought to reengage its northern neighbor.