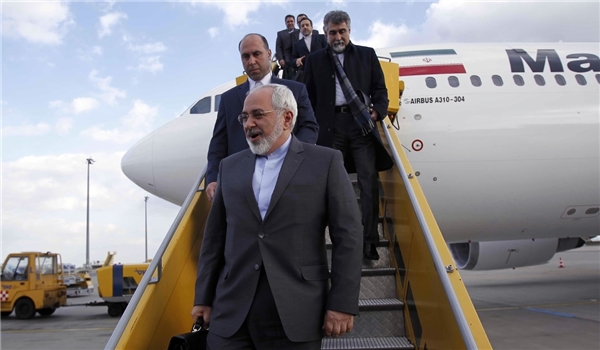 Vienna, April 7, IRNA – Iranian Foreign Minister Mohammad Javad Zarif and his negotiating team arrived in Vienna on Monday for the third round of nuclear talks with six western powers aimed at reaching a comprehensive final nuclear deal by July 20.

Zarif is scheduled to have a working dinner with European Union foreign policy chief Catherine Ashton later this evening.

Tehran said it had constructive and useful expert-level nuclear talks with world powers in Vienna last week, addressing all major technical issues in the way of a final accord.

Iranian negotiator Hamid Baeedinejad told IRNA on Saturday that the results of those technical discussions were to be submitted on Monday to Zarif and Ashton who acts on behalf of the six world powers – the United States, France, Germany, Russia, China and Britain.

Zarif and Ashton will lead the negotiations on Tuesday and Wednesday.

According to Iranˈs deputy foreign minister and chief nuclear negotiator Abbas Araqchi, Tehran aims to make sufficient progress at this round of nuclear talks in an effort to begin drafting the text of a comprehensive Iran nuclear agreement.

ˈWe hope that in the upcoming talks, we would be able to bring the views closer and narrow the differences regarding major issues, so we could get to the details … and start writing the text,ˈ Araqchi told Iranˈs Press TV.

Western diplomats – notably from Germany and the US — were upbeat that an agreement could be sealed by July 20.

Last month, Franceˈs top representative at the E3 plus 3 talks with Iran went reportedly as far as to say that a nuclear accord could even be reached before the July 20 deadline.