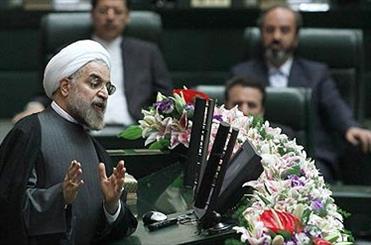 Esmail Jalili, a member of board of a Principalist faction in the Parliament, Rahrovan-e-Velayat (Followers of the Leader) told Mehr News Parliament correspondent that Rouhani had met in the first session in the new year with Parliamentarians and demanded their  ‘close cooperation’ so that the second phase of Targeted Subsidies Plan would be successful.

“President Rouhani told the Parliament that 61st European Parliament’s fact sheet had a aggressive tone toward Iran, but it was less so compared to previous resolutions yet,” told Jalili, who was quoting Rouhani speaking in Parliament saying that the government would manage pressures coming from such resolutions.

Jalili, who represents Masjed Soleiman, an oil-rich southern city of Khuzestan in the Parliament, told that with the second phase of Targeted Subsidies Plan implemented, the government could manage the lack of resources through controlling inflation and creating jobs for the young cohort, thus addressing Parliamentarians’ concerns over unemployment.