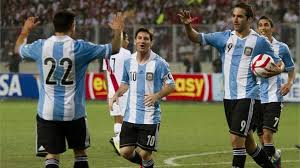 The actual squad will not be selected until late May but Hart has a fair idea of what his selection will look like.

Hart’s team last played a friendly international on November 19, a 2-0 win at home over Jamaica.

“We haven’t played since November so now we have to try and gather the team to make sure we are prepared to play against Argentina,” Hart told TTFA Media.

“I would like ideally to have about ten days with the players but we have to look at the fact that some players will still be playing in their Leagues and others will be off for a quite awhile which means we have to address their standards and basically get the team in some sort of preparation mode hopefully with an international game before Argentina,” Hart added.

The game against Argentina on June 4 and Iran in Sao Paolo on June 8 are not on the FIFA dates for friendlies and while the two World Cup teams will have their full compliment of players, Hart does not expect to have easy access to this country’s America MLS-based players and possibly a couple more whose leagues in Europe runs into the summer.

That being said, Hart sees the two games as a massive opportunity for the National team.

“It’s not a FIFA date so it depends on what kind of squad we have.

“We are going into games against two international teams that are gong to be fully prepared for the World Cup. It’s both teams last games before they enter the World Cup so you have to have realistic expectations and approach.”

“As far as I am concerned, the players have to understand that they are going into these games purely as a measurement of where we are at and where we need to be if you are going to play on the world stage and arguably you are going to play one of the favourites to win the World Cup which in itself, playing them at home is a very confortable situation for them and an uncomfortable situation for us.

But I think that is a healthy situation because as we build for the future, you have a potential scenario of qualification that you have to play a set amount of games away from home,” Hart stated.

Hart will meet with his local staff next week to outline the preparations leading up to the two friendlies in June.

Prior to facing TT on June 8th in Sao Paolo, Iran has friendlies lined up against Mozambique on May 7th, Belarus, Montenegro, and Angola on May 18, 26 and 30 respectively.

The TTFA will be in a position later this month to relay details on how local fans wishing to attend the game against Argentina in La Plata can have the opportunity to do so.