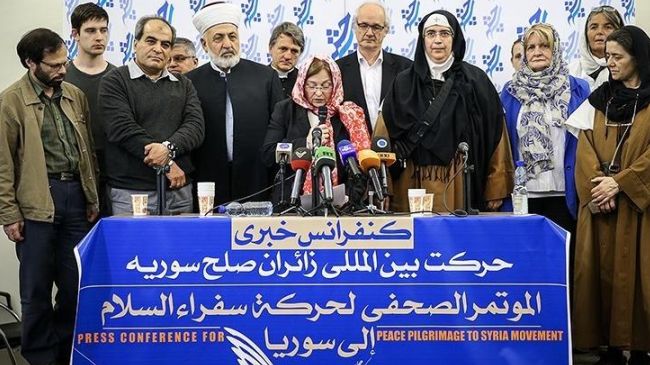 Tehran, April 6, IRNA – A group of international peace activists has arrived in Tehran to start a movement aimed at providing humanitarian aid to Syrians and the establishment of peace in Syria.

“We don’t come as powerful politicians with any great political agenda beyond the call for peace. We come as ordinary people representing ordinary people across our own countries. Our desire is simply to join hands with the people of Syria in the work of reconciliation and peace and the rebuilding of their country after the strife is over,” Father Dave, an Australian priest and a member of Pilgrims of Peace, said during a press conference in Tehran on Saturday.

In a statement released on Saturday, Pilgrims of Peace underlined that they are not affiliated with any of the parties involved in the Syrian conflict, support peace and oppose violence in Syria, and believe that peace can only be achieved in Syria through dialog and negotiations.

“Media are presenting to the world a version of what is happening in Syria that is deceiving,” Agnes Mariam, a member of the Support Team for Syria Reconciliation, commented.

“We visited the refugee camps. We visited many people in Syria itself. And we were shocked by the tremendous sufferings of the Syrian people, both inside the country and in the neighboring countries,” Mairead Maguire, a Noble Peace Prize laureate, said.

The peace activists also condemned any foreign intervention in Syria, and stressed that only the Syrian people must decide about their future. They also denounced the crimes committed in the name of religion by Takfiri extremists operating inside Syria, urging regional countries to stop sending arms and financial aid to these groups.

The group is scheduled to leave Iran for the Syrian capital, Damascus, on April 9.

Syria has been gripped by deadly violence since 2011. Some sources say over 130,000 people have been killed and millions displaced due to the violence fueled by Western-backed militants.