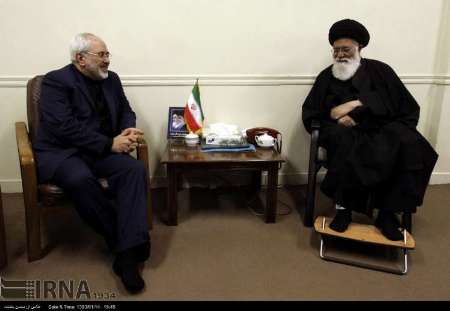 ˈThe people have always supported the nuclear negotiation team, similar to their presence in various sensitive scenes, such as the anniversaries of the Islamic Revolution, like last year in defense of the systemˈs values,ˈ he said in a meeting with the Friday Prayers Imam of Mashˈhad Ayatollah Seyyed Ahmad Allamal-Hoda.

Referring to the ongoing 3rd round of nuclear talks with the six world powers, he informed the ayatollah that this round of technical talks, which began on Thursday, is aimed at drafting a shared text and eliminating the remaining ambiguities in the way of achieving a final comprehensive nuclear agreement.

Elaborating on the details of the 1st and 2nd rounds of the nuclear talks, Zarif said, ˈWe will never compromise over the natural right of our country to use the nuclear energy for peaceful purposes and we will always defend it.ˈ

The Friday prayers leader of Mashˈhad, too, said for his part in the meeting, ˈOur countryˈs nuclear negotiation team shoulders a very sensitive and important responsibility and is in the frontline of defense of our nation in their bid to achieve mastership in producing nuclear energy for peaceful purposes.ˈ

He also wished continuous success for the Iranian nuclear negotiation team in performing their tough task.

Zarif had also in December 2013 in a meeting with the guardian of Imam Rezaˈs Holy Shrine Ayatollah Abbas Vaˈez-Tabasi and the Friday prayers imam of Mashˈhad Ayatollah Allamal-Hoda elaborated on Iranˈs achievements in nuclear talks with the world powers.

The third round of talks between the Islamic Republic of Iran and the G5+1 is to be kicked off in Vienna on Thursday afternoon.

Director-General for Political and Legal Affairs in the Foreign Ministry, Hamid Baˈeidinezhad, is leading the Iranian delegation in the three-day talks with the G5+1.

The two sides will try to close ranks prior to reaching final accord on Iranˈs peaceful nuclear dossier.

This round of talks between the two sides will last for three days.

Iranˈs Foreign Minister, Mohammad-Javad Zarif, and the European Union Foreign Policy Chief, Catherina Ashton, are to co-chair the third round of talks dubbed as ˈVienna-3ˈ on April 7-8 in order to find a final deal in line with the Geneva accord.