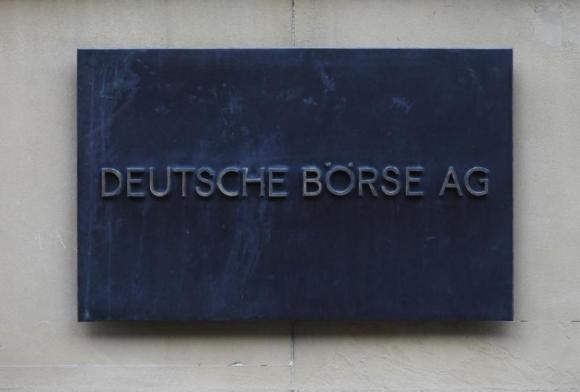 The plaque of the Deutsche Boerse AG is pictured at the entrance of the Frankfurt stock exchange February 1, 2012.

Deutsche Boerse on Wednesday said Clearstream was cooperating in an investigation launched by the U.S. Attorney for the Southern District of New York, months after reaching a $152 million settlement with the U.S. Treasury’s Office of Foreign Assets Control (OFAC) over the same issue.

Several U.S. regulators have been taking an increasingly hard line with financial institutions suspected of violating anti-money laundering rules or economic embargoes on countries like Iran, imposing billions of dollars in penalties and potentially bans on certain types ofbusiness.

A court filing showed this week that a U.S. grand jury was looking into whether Clearstream Banking SA took any steps to benefit Iran and its central bank, in a case that stems from the 1983 bombing of the U.S. Marine barracks in Beirut.

“While Clearstream is cooperating with the U.S. Attorney, the investigation is in a very early stage,” Deutsche Boerse said in a statement.

The news sent Deutsche Boerse’s share 2.4 percent lower on Wednesday, making it the biggest decliner in an index of German blue-chip stocks that was slightly higher.

“Of course the investigation is creating uncertainty because it’s unclear how it will turn out but you also shouldn’t overestimate it,” said LBBW analyst Martin Peter, who has a “hold” recommendation on the share.

Deutsche Boerse had denied wrongdoing in the OFAC investigation and the $152 million settlement was not an admission of guilt, although it did dent the exchange operator’s 2013 results.

Other financial services firms have also been hit hard by U.S. regulators.

British bank HSBC paid nearly $2 billion in penalties in December 2012 to resolve charges that it failed to stop hundreds of millions of dollars in drug money from flowing through the bank from Mexico.

HSBC’s promise to make progress in improving its anti-money laundering programme is being monitored by an official selected by the government.

Regulators in New York and Washington are also looking at potential violations by Credit Agricole and Societe Generale of U.S. economic sanctions, a person familiar with the investigation told Reuters.

In the Clearstream Banking case, the grand jury subpoena issued in New York seeks documents related to any property held or any services rendered by Clearstream for the benefit of Iran or its central bank, Bank Markazi. The grand jury is looking at possible violations of money laundering and Iran sanctions laws, according to the subpoena.

The filing on Monday came as part of a lawsuit brought by family members of the victims of the Beirut bombing, who won a $2.7 billion judgment against Iran in 2007. The families have accused Iran of providing material support to Hezbollah, which carried out the attack, killing 241 U.S. servicemen.