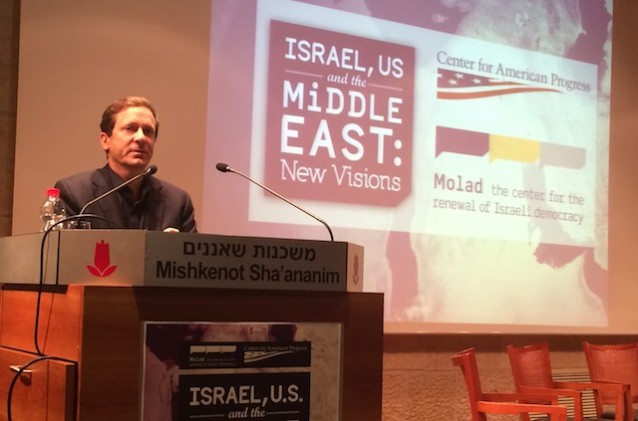 JERUSALEM — The leader of Israel’s main opposition party said on Tuesday that he supports the United States and its international partners, the so-called P5+1, in their negotiations with Iran over its nuclear program and he criticized current Israeli government officials for publicly attacking the Obama administration on the Iranian issue.

“I think the P5+1 are on top of it,” Israel’s Labor Party leader Yizhak Herzog said in an exclusive interview with ThinkProgress. Herzog said he did not want to preempt the talks with Iran by laying out what he believed should be part of the final deal. “There’s a lot of question marks,” he said. “I’ll leave it open.”

By contrast, Israeli Prime Minister Benjamin Netanyahu and other members of his cabinet have been publicly outspoken in their displeasure with the United States and its talks with Iran. Netanyahu said the first step nuclear deal between Iran and the P5+1 (the U.S., U.K, France, Russia, China and Germany) was a “historic mistake” and that, as part of the final agreement, he would accept nothing less than a full dismantling of Iran’s nuclear program, an option President Obama has said is “not available.”

The U.N.’s nuclear watchdog reported last month that Iran is currently abiding by the termsof the interim agreement: reducing its enriched uranium stockpile and allowing expanded and more intrusive inspections at its nuclear facilities.

“In my government, you will not hear criticism [of the U.S.] in the same way by our Defense Minister,” Herzog said in a speech at an event in Jerusalem on Tuesday co-sponsored by the Center for American Progress and Molad, a progressive Israeli think-tank. The Labor Party leader was referring to Israeli Defense Minister Moshe Ya’alon’s recent claim that the U.S. “shows weakness” around the world and suggested Israel will have to attack Iran on its own because he does not trust the U.S. to solve the nuclear situation.

“You can argue but we won’t embarrass,” Herzog told ThinkProgress after his speech. “Sometimes it’s out of control. … Some of the comments by Ya’alon probably were not approved by Netanyahu in advance. But this type of style of the bashes of the United States is wrong. It’s outrageous.”

During a panel discussion on the Iranian nuclear program at the joint CAP-Molad event,Shlomo Brom, of the Institute for National Security Studies in Israel, also said it was a “big mistake” for Netanyahu to criticize the interim nuclear deal with Iran. Brom, who is a retired Israeli Defense Forces Brigadier general, said that Netanyahu opposes the first step deal because it “indicated that the final deal [Iran] will have the right to enrich uranium with some limitations.”

But, Brom added, anyone who thinks Iran won’t be allowed some kind of civilian enrichment capability with rigorous inspections as part of the final deal is “deluding themselves.” A reasonable deal, he said, will be one that extends the amount of time it takes for Iran to build a nuclear weapon should it decide to do so.