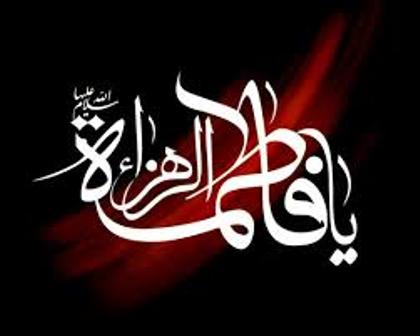 Some Shiite scholars believe that she was born on 20th of Jamadi-ul-Sani, 5th A.H. but the majority of Sunni scholars declared that her birth had happened 5 years before Beˈsat (Prophetˈs assignment to apostleship).

By the Godˈs will, prophet (PBUH) named her `Fatimaˈ. She also had some other appellations like: Zahra, Batool, Tahereh, Razieh, Maryam-e Kobra, and Sedigheh.

In her childhood, she contemplated the Meccaˈs pagansˈ great animosities, and also suffered three years in the place named Shaˈbe Abitalib under a very difficult condition.

Her mother, Hazrat-e Khadijeh (S.A) died in 10th A.H. immediately after the death of Aboutalib, the sincere friend and supporter of the Prophet Mohammad (PBUH).

This great grief made her, Hazrat-e Ali (AS) and the Prophet (S.W) unhappy, putting them in grief. They

named that year ˈOm-ul-hoznˈ which meant the Grief year.

On 13th of Beˈsat (the prophetˈs apostleship) on the Prophetˈs order, his family and companions immigrated to Medina.

During the time, Medina was the deponent of many wars between the Prophet and the pagans, in and out of the country.

Hazrat-e Fatemeh (S .A) married to his cousin, Hazrat-e Ali (AS), who was one of the most important characters in Medina. Since Hazrat-e Ali (AS) was always at wars, especially for the ten years after the immigration to Medina, so she accomplished all the responsibilities of the family.

Though Hazrat-e Fatemeh (SA)ˈs life was full of troubles and sufferings but the death of Hazrat-e Mohammad (PBUH) was the most grievous one. The event, which was the beginning of the more bitter troubles such as the pagansˈ outrages upon the decency of their family. Those events motivated her to

be the great supporter for Hazrat-e Ali (AS).

Her speeches in Medina mosque, and the addressees to Ansar and Mohajerˈs women, to persuade them to support Hazrat-e Ali (AS) could be mentioned as examples. She was the symbol of womanhood. She embodied in her translucent personality all those qualities that made her a paradigm of virtue.

The Prophet saluted at her door. The celestial angels sang her praise. Even God Almighty called her the blessed fountain of Kowsar and vouchsafed her virtue in the Verse of Purity (Holy Qoran 33:33).

Hazrat-e Fatemeh (SA) died soon after the death of his father because of the imposed spiritual and physical sufferings. She was buried in a secret place according to her will.

Today Shiite Muslims in Iran and other countries are mourning for loss of the great lady.

On this occasion, mourning processions are held in religious centers in all major cities of Iran.

During processions mourners beat their chests as express of profound grief over martyrdom of Hazrat Fatima Zahra (SA).

The staff and management of IRNA condole the faithful on the occasion.