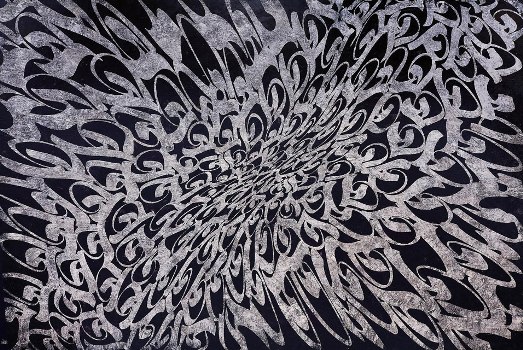 After working with the Society of Iranian Calligraphers for fifteen years and achieving a master level in the medium by learning eighteen classical writing forms of calligraphy, he sought greater freedom in formal experimentation and began creating large-scale compositions that engage recent breakthroughs in contemporary art. In his latest paintings, Bozorgi utilizes a meditative process of repetition that grows into an optical expanse of depth and volume across the surface of the canvas.

The artist’s painstakingly executed compositions teem with energy as Arabic or Farsi text explodes outward into a rhythmic infinity. Such abstracted compositions accentuate the written word through a focus on symmetry and gestural forms, updating the centuries-old tradition of calligraphic painting in Islamic art while building on experiments in non-objective art since the mid twentieth century.

In Iran, such fusing of two seemingly disparate approaches to abstraction has been prevalent since the emergence of the Saqqakhaneh school of painters in the 1960s, which initially included Charles Hossein Zenderoudi and Parviz Tanavoli, and has been further developed in the twenty first century by forward-thinking artists like Bozorgi, who is recognized as a leading figure among the “New Generation.” Born in Tehran in 1978, Mohammad Bozorgi holds a Bachelor of Science in Biomedical Engineering as well as an MBA from the Industrial Management Institute and Momtaz degrees from the Calligraphy Association of Iran.

After training with the Society of Iranian Calligraphers for over a decade, Bozorgi left the Society to pursue more innovative calligraphic forms. Studying classical calligraphic forms such as divani, kufic, nastaliq, naskh, sols, Mohaggegh and broken nastaliq, allowed Bozorgi to develop distinctly stylized characters based on Arabic and Persian examples. He approaches calligraphy with an architectural eye that is evident in the mathematical structure and symmetry of letters, especially those in his Crying for Honour series. Drawing from his background in engineering, Bozorgi makes qualitative calculations when constructing his works, using the directives of geometry to create abstract illusions of movement and space.