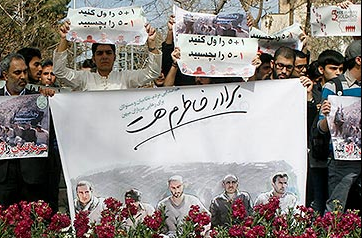 MASHHAD, March 30 (MNA) – A group of Iranians in the north eastern city of Mahshahd has held a demonstration in front of Pakistan’s consulate Sunday morning to protest the country’s effect over Iranian border guards.

On February 3 five Iranian border guards were kidnapped and transferred into Pakistan by Jaysh Al-Adl in Jakigour region on Iran-Pakistan borders.

During February Iran and Pakistan signed an agreement to establish committees over the abduction case and demanded the soldiers’ release.

Pakistan did not find the terrorists and on March 23 one of the Iranian hostages was martyred by the terrorist group. The news was published via Jaysh Al-Ahd’s twitter but Pakistan government has not officially admitted the news yet.

Since March 23 Iran has asked Pakistan and also international organizations to take quick action to release the rest of the hostages.

Also IRGC announced on Saturday that 300 kilometers of Iran-Pakistan borders would be under the direct control of the army.

Martyrdom of one of the guards upset Iranians who want firm measures taken by the officials to release the other four hostages.

On Sunday, March 30, one week after Jamshid Danaeifar, one the of guards’ martyrdom people in north eastern city of Mashhad held a demonstration in front of Pakistan consulate to protest the country’s negligence.

On the banner it is written both in Persian and English: “Free Iranian Soldier.”

The man holds his hand up to show the five fingers, representing five soldiers and the red finger among the five represents one of them who was killed in Pakistan.

On the banner on the right side of the photo two sentences in Persian say that “they were five” and that “oh Father, when you are not here anymore” referring to the martyred guard’s new born infant who never saw its father.

Here in this photo boots of our compatriots are demonstrated while the audience sees only four pairs of boots and feet and a pair of boot is with no feet and red flowers instead which represents one of the guards’ martyrdom.

On the banner a sentence in Persian says “I remember my brother,” showing that the martyred soldier is like a brother for all of us.

On the banner in the woman’s hands the sentence is asking to “release our soldiers.”

This is the front view of Pakistan’s consulate in Mashhad.

On this photo Iranian officials are asked to “leave nuclear talks with P5+1 and take the case of 5-1 abducted soldiers seriously.” Actually the writers are playing with the numbers 5 and 1with the difference of plus and minus.