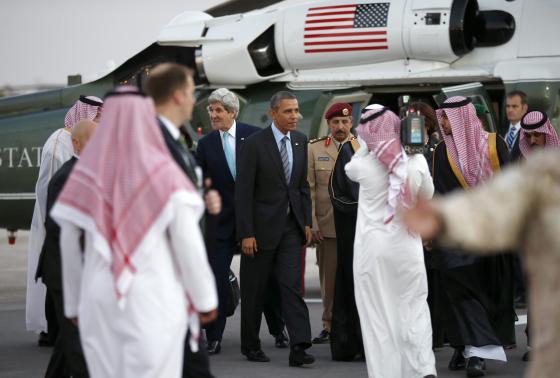 (Reuters) – President Barack Obama sought to reassure Saudi King Abdullah on Friday that he would support moderate Syrian rebels and reject a bad nuclear deal with Iran, during a visit designed to allay the kingdom’s concerns that its decades-old U.S. alliance had frayed.

Flying by helicopter to the king’s desert camp, Obama underscored the importance of Washington’s relationship with the world’s largest oil exporter in a two-hour meeting that focused on the Middle East but did not touch on energy or human rights.

Last year senior Saudi officials warned of a “major shift” away from the United States after bitter disagreements over its response to the “Arab spring” uprisings, efforts to negotiate withIran, and Washington’s decision not to intervene militarily inSyria, where Riyadh wants more American support for rebels.

While the two leaders discussed “tactical differences”, they both agreed their strategic interests were aligned, a U.S. official told reporters after the meeting.

“I think it was important to have the chance to come look him (King Abdullah) in the eye and explain how determined the president is to stop Iran from getting a nuclear weapon,” the official said.

The meeting was a chance to assure the king that “we won’t accept a bad deal and that the focus on the nuclear issue doesn’t mean we are not concerned about, or very much focused on, Iran’s other destabilizing activities in the region.”

The leaders had a full discussion about Syria, where a three-year-old civil war has killed an estimated 140,000 people and uprooted millions.

The official said both countries shared the objective of a political transition in Syria and supporting moderate opposition to Assad.

Riyadh has long differed from Washington about Obama’s reluctance to supply rebels with surface-to-air missiles, sometimes known as MANPADS.

The Washington Post reported on Friday that the United States was ready to increase covert aid to Syrian rebels under a new plan that included training efforts by the CIA, and was considering supplying MANPADS.

The White House has not closed the door to the possibility of such a move in the future, but officials said U.S. qualms about providing those weapons to rebels had not changed.

“We have made clear that there are certain types of weapons, including MANPADS, that could pose a proliferation risk if introduced into Syria,” deputy national security adviser Ben Rhodes told reporters on Air Force One during Obama’s flight from Rome to Riyadh. “We continue to have those concerns.”

Saudi officials made no immediate comment on the meeting but Saudi state media said the talks were focused on Middle East peace efforts and the Syrian crisis.

The elderly king, accompanied by a number of senior princes, had what appeared to be an oxygen tube connected to his nose at the start of the meeting at his desert farm at Rawdat Khuraim northeast of the capital Riyadh.

While Saudi Arabia supplies less petroleum to the United States than in the past, safeguarding its energy output remains important to Washington, as does its cooperation in combating al Qaeda.

The Saudis, meanwhile, want more reassurance on American intentions regarding talks over Iran’s nuclear program, which could lead to a deal that lifts sanctions on Tehran in exchange for concessions on its atomic facilities.

Riyadh fears such a deal could come at the expense of Sunni Arabs in the Middle East, some of whom fear that Shi’ite Iran would take advantage of any reduction in international pressure to spread its influence by supporting co-religionists.

An editorial in the semi-official al-Riyadh newspaper on Friday said Obama does not know Iran as well as the Saudis do, and could not “convince us that Iran will be peaceful”.

“Our security comes first and no one can argue with us about it,” it concluded.

In the run-up to the visit, officials had said Obama would aim to persuade the monarch that Saudi concerns that Washington was slowly disengaging from the Middle East and no longer listening to its old ally were unfounded.

Contrary to Saudi preferences for Syria, Obama has shown himself wary of being drawn into another conflict in the Muslim world after working hard to end or reduce American military involvement in Iraq and Afghanistan.

Rhodes said coordination with the kingdom on policies toward Syria, particularly on providing help to the Syrian rebels, had improved.

“That’s part of the reason why I think our relationship with the Saudis is in a stronger place today than it was in the fall when we had some tactical differences about our Syria policy,” he said.

The Saudi king was accompanied in the talks by Crown Prince Salman, Prince Muqrin, who was named second-in-line to rule on Thursday, and Foreign Minister Prince Saud al-Faisal.

Also present was the new American ambassador in Riyadh, Joseph Westphal, whose appointment was confirmed by the Senate late on Wednesday, apparently in order to let him attend Friday’s meeting.

U.S. officials said Obama had not had time to raise concerns about the kingdom’s human rights record. They said Washington would continue to press Riyadh about its concerns, which include women’s rights. Obama will award Dr. Maha Al-Muneef with the Secretary of State’s International Woman of Courage Award in Riyadh on Saturday, the White House said.