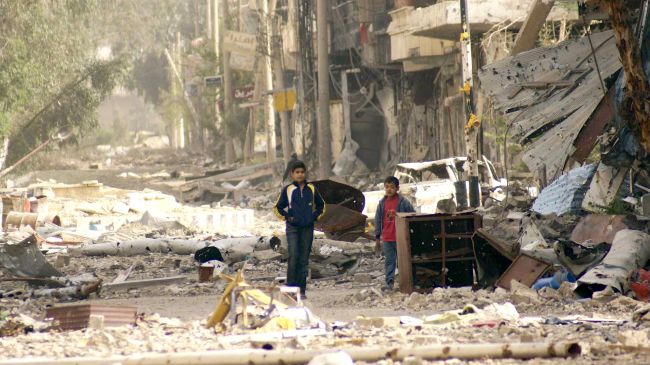 Children walk amid rubble in an unknown location in Syria. (File photo)

A senior Iranian lawmaker says Syria and Turkey should exercise restraint amid recent conflicts between the two sides.

The Iranian official also stated that Turkey should play a constructive role in the resolution of Syria crisis.

He also commented on the growth of terrorism across the Middle East saying that Turkey should take appropriate measures to counter the issue as Ankara itself is already being threatened by terrorism.

On March 26, Turkish forces fired several rounds of artillery across the frontier into a border region, which is administratively part of Syria’s western province of Latakia.

The move came after Turkey shot down a Syrian military aircraft on March 23.

In the official protest letters, the Syrian ministry also alleged that Turkish Prime Minister Recep Tayyip Erdogan issued “instructions to launch flagrant aggression on Syria as the Turkish army tanks and artillery took part directly in the attack on Kasab, north of Syria, and its surrounding.”

Syrian Ambassador to the UN Bashar Ja’afari has also accused the Turkish government of collaborating with the Israeli regime in facilitating the intrusion of al-Qaeda-linked militants into Syria as well as supporting their terrorist efforts and military offensives against Syrian forces.