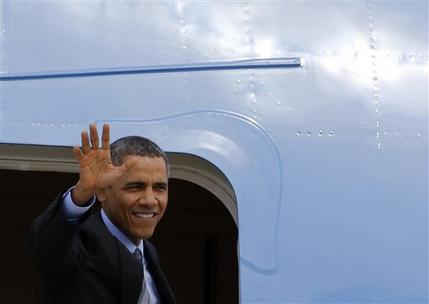 ROME (AP) — President Barack Obama is making a fence-mending mission to Saudi Arabia, an important Middle East ally that’s grown nervous as the U.S. negotiates with Iran and pulls out troops from Iraq and Afghanistan.

Obama left Friday for an overnight trip to Saudi Arabia that has only two items on its public schedule: a meeting and a dinner with King Abdullah at his desert camp, a 30-minute helicopter ride from the capital of Riyadh.

Secretary of State John Kerry was traveling with Obama for what will be the president’s third official meeting with the king in six years.

White House officials and Mideast experts say the Saudi royal family’s main concern is Iran. They fear Iran’s nuclear program, object to Iran’s backing of the Bashar Assad regime in Syria and see the government of Tehran as having designs on oil fields in Saudi Arabia and Bahrain.

White House deputy national security adviser Ben Rhodes identified the points of anxiety in the relationship when he described Obama’s agenda for the trip last week as: “Our ongoing support for Gulf security, our support for the Syrian opposition where we’ve been very coordinated with the Saudis, the ongoing Middle East peace discussions, as well as both the nuclear negotiations with Iran but also our joint concern for destabilizing actions that Iran is taking across the region.”

The Saudi anxieties have been building over time, according to Simon Henderson, a fellow at The Washington Institute, a think tank focused on Middle East policy.

“Ever since Washington withdrew support for President (Hosni) Mubarak of Egypt in 2011, Abdullah and other Gulf leaders have worried about the reliability of Washington’s posture toward even longstanding allies,” Henderson wrote this week. “President Obama’s U-turn on military action against Syria over its use of chemical weapons last summer only added to the concern, which has likely morphed into exasperation after recent events in Crimea, where the Saudis judge that President Obama was outmaneuvered by Vladimir Putin.”

The technological advances that have increased oil and gas production in the United States have also made Gulf states nervous, said Tamara Cofman Wittes, a senior fellow at the Brookings Institution and director of its Saban Center on Middle East Policy

“A lot of people in the region, I think, are naturally asking themselves what America’s energy independence means for America’s willingness to invest in the security of energy and supply from the Gulf,” she said.

Obama spent the past four days trying to secure European unity against Russia’s incursion and subsequent annexation of Crimea. But ahead of his meeting with King Abdullah, Obama also met with Prince Mohamed bin Zayed, crown prince of Abu Dhabi, the richest emirate in the United Arab Emirates federation and a Saudi ally.

Not all the Saudi concerns are aimed at the U.S. Obama’s meeting with King Abdullah comes just days after an Arab summit in Kuwait City ended with participants divided over which opposition factions in the Syrian conflict to support. Those tensions are especially evident between Saudi Arabia and Qatar, a small but oil-rich Gulf state.

Saudi Arabia and its allies have accused Qatar of arming militant Islamic fighters in the Syrian conflict.

That dispute, among others, undid a possible Gulf Cooperation Council session that Obama had hoped to attend in Saudi Arabia.

Friday’s talks also come in the aftermath of Saudi Arabia’s refusal to grant a visa to the Washington bureau chief of The Jerusalem Post who had sought to cover Obama’s trip. Rhodes told reporters that the U.S. government reached out to Riyadh to intervene but to no avail.