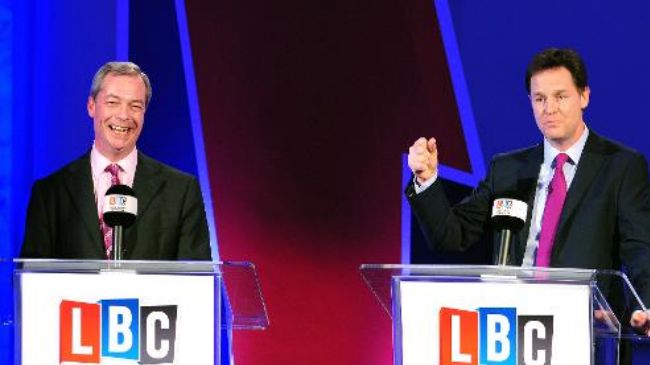 EU has blood on hands over Ukraine: UKIP chief

The anti-EU head of UK Independence Party (UKIP) has accused the European Union of having “blood on its hands” over the recent crisis in Ukraine.

Nigel Farage made the remark in a live TV debate with UK Deputy Prime Minister Nick Clegg on Wednesday.

“We should hang our heads in shame. The British government has actually geed up the EU to pursue effectively an imperialist, expansionist” agenda in Ukraine, Farage noted.

He added that London gave a false series of hopes to a group of people in the western Ukraine.

This is while, Clegg, the leader of the Liberal Democrats party, said in an interview on Thursday morning that Farage’s “shocking” comments in the debate were “insulting” to people in Ukraine.

He also accused the UKIP leader of siding with the Russian President Vladimir Putin.

Ukraine crisis began last November, after Ukraine’s then president, Viktor Yanukovych, refrained from signing a deal with the EU in favor of closer ties with neighboring Russia.

The refusal triggered months of unrest that led to the ouster of Yanukovych on February 23. He then travelled to Russia, where he was given sanctuary.

Tensions between the Western powers and Moscow heightened after Crimea declared independence from Ukraine and formally applied to become part of the Russian Federation following a referendum on March 16, in which nearly 97 percent of Crimeans voted for union with Russia.

The US and the European Union (EU) swiftly imposed sanctions on Russia after Crimea rejoined Russia.