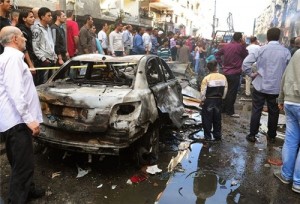 TEHRAN (FNA)- Twenty-six people died across Iraq on Tuesday, according to medical and security officials.

Fourteen people died in a single car bomb attack in Eastern Baghdad which set other cars on fire and blasted through storefronts, 45 were wounded in the blast, Reuters reported.

A further three were killed in a the Western province of Anbar in a separate car bomb attack, while gunmen killed three policemen in the Northern town of Baiji, and another six were killed in two other attacks, a car bomb and a shooting.