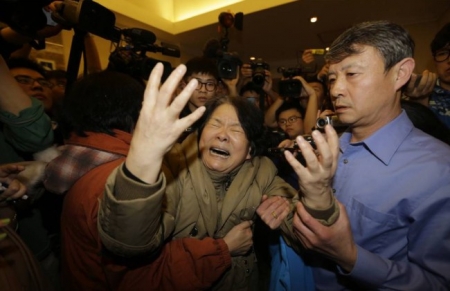 The families of some of the Chinese passengers on board flight MH370 have accused the Malaysian authorities of being ‘the real executioners who killed’.

In a damning statement released on behalf of the relatives of some of the 154 Chinese nationals on board the doomed flight, they accuse Malaysia Airlines as well as the country’s government and military of playing a part in their loved ones’ deaths.

Describing authorities’ delay in action as ‘shameless’, the statement – released to the media – reads: ‘Eighteen days have passed during which the Malaysian government and military constantly tried to delay, deceive the passengers’ families and cheat the whole world.

‘This shameless behaviour not only fooled and hurt the families of the 154 passengers but also misguided and delayed rescue actions, wasting a large quantity of human resources and materials and lost valuable time for the rescue effort.

Relatives of passengers of the missing Malaysia Airlines flight MH370 give a joint statement to the media (Picture: EPA)

‘If the 154 passengers did lose their lives, Malaysia Airlines, the Malaysian government and military are the real executioners who killed them.

‘We the families of those on board submit our strongest protest against them.’

Earlier today, the Malaysian authorities said that MH370 ‘beyond all reasonable doubt’ crashed in the Indian Ocean and that ‘none of those on board survived’.

The announcement came after new satellite data showed the Malaysian Airlines plane had flown through the ‘southern corridor’ in the Indian Ocean, where its journey ended.

Meanwhile, as the world came to terms with the crash ‘confirmation’, conflicting theories emerged on how the lost plane ended up in the Indian Ocean.

A report in the Telegraph claimed investigators now believe the incident was a suicide mission, quoting sources close to the inquiry.

However, a story published by the Daily Beast claims the new information indicates that the pilots were trying to bring the Boeing 777 jet to safety.