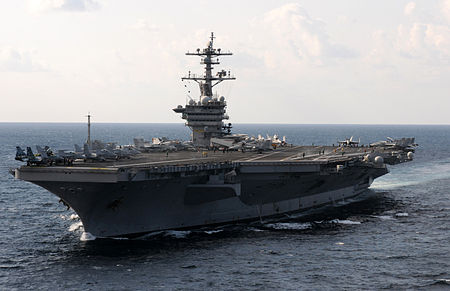 TEHRAN (FNA)- A replica of a US aircraft carrier spotted near the coast of Iran is a set being built for a movie which will display the US Navy warships’ downing of an Iranian passenger plane in 1988, the Iranian media said.

The CNN said last week that Iranians are building a replica of a US nuclear-powered aircraft carrier.

Satellite photos showed what looked like one of the US Navy’s Nimitz-class aircraft carriers, complete with planes, rising from Iran’s Gachin shipyard, near the port of Bandar Abbas.

But the Iranian media said on Sunday that it was “part of the decor and stage settings” of a movie being made by Iranian director Nader Talebzadeh on the 1988 shooting down of an Iran Air civilian plane by the USS Vincennes.

“The issue has turned into a good excuse for another wave of hype against Iran,” said the Iranian Alef news website. “Without any proof or real basis, the western media have jumped again to paint a negative picture of Iran.”

At the height of the Iraqi imposed war on Iran, the USS Vincennes in the Persian Gulf blew up Iranian airliner 655, killing all 290 citizens on board, including nearly 70 children.

Iranian Airbus A300 plane was making a routine flight from the country’s southern port city of Bandar Abbas to Dubai in the United Arab Emirates.

The American officials had later claimed that the USS Vincennes had mistaken the Iranian passenger plane for an F-14 fighter. The claim was later proved to be unfounded by more evidence.

Although Iran filed against the US in the United Nations and the International Civil Aviation Organization (ICAO), both bodies adopted a politicized attitude and declined to follow up the case legally, they only bothered to sympathize with the bereaved families of the victims.

Iranians mark July the 3rd each year by showering the site of the disaster with flowers.

1988 shooting down of an Iran Air civilian plane, Quoted, replica of a US aircraft carrier in Iran waters, US, US nuclear-powered aircraft carrier March 24, 2014
Iran urges Turkey, Syria to exercise restraint
Photos: Exhibition of ‘Old Tehran’ in Tehran