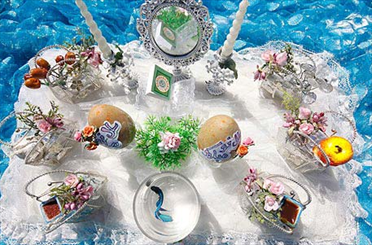 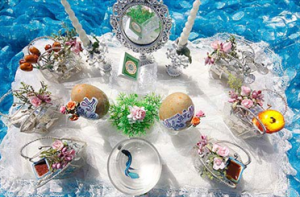 TEHRAN, March 20 (MNA) – Norouz, celebrated by Iranians in the beginning of new Iranian year is the messenger of renewal and rebirth of nature.

Iran with its various cultures and customs celebrates Norouz through local traditions and rituals very similar to one another in all provinces.

The turn of the New Year and its impact on the economic and social lives of people contributed to symbolic reactions in culture, manifest in a constellation of traditions, rituals, and ceremonies held in Norouz.

Cleansing home is to clean home environment from its filth and is a move symbolic of cleanliness and bringing happiness and felicity to home, and removing darkness. The fundamental to Norouz home cleansing is to renew and clean the living space.

During home cleansing, moms enter their phase of activity days ahead of the New Year’s Day. They would wash all parts of the house, kitchen appliances, clothes, and remove the old dust, collected long the year. It is a deeply-rooted tradition among Iranians in the ending day of the year.

Planting the seeds of beans and crops few days before the Norouz and beholding to the sprouting of the seeds is among Iranian rituals since times immemorial. The tradition is also practiced now among people. Every family grows seeds of wheat, barley, lentil, nuts, and beans and garlic in plates.

Some others green the clay jars with rubbing garden cress seeds. Some believe that they should grow beans to the number of the family members. In some provinces, housewives grow amaryllis bulbs, garlic, and hyacinth in pitted jugs so that they grow and their flowers coming out of the holes, decorate beautifully the Seven-Seen spread of Norouz.

A tradition practiced in eastern provinces to welcome Norouz is singing special songs. More common in the past, the tradition is usually started in the first half of Iranian month of Esfand (February-March). The singers act either individually or collectively in a group of two and three individuals. They tour the villages and promise the coming of the New Year.

Hail to thou, the household,

Hails to thou from Molla Beig,

Nowrouz of Sultan hath come, flowers groweth in the rosary,

The songs contain eulogies of Ali (AS) and other Imams of Shiite Muslims. It is a tradition that the people of the house give gifts of rice, confectionary, walnut, or cash to singers of Nowrouz songs and they wish health for the family members in return.

Chaharshanbe suri (the last Tuesday night of the year)

In the evening of the last Tuesday of the Iranian year, the young people start bonfires and jump over the fire, chanting the lines ‘the pallor of my face is from thou, and the rosiness of thy face is from me; O, sorrows depart! O happiness, arrive thou! O plight, depart! O plenty, come thou! O felt, depart! O carpets, thou come!’

In a tradition called Fal-Gûsh Iranians believe that certain days are especially good for divination. During the Chaharshanbe Suri, divination, especially by listening to the conversations of the passers- by and interpreting that which is heard (fālgūsh) as a sign is quite common.

Throwing shawls or scarves is also common in some villages and in the Chaharshanbe suri evening, during which the young lads cast their shawls to the houses and wait for gifts given by the household. The members of the house put some fruits, confectionary, and sweets in the shawl and return to the shawl caster.

It is also an old tradition that the youth disguise their faces in masks and with Qashoq-zani, communicate their presence to the house members to receive gifts. Local games, breaking jar as a symbol of keeping afar the plight, special dishes of the Chaharshanbe suri with the intention of fulfilling wishes, cooking special foods for the dinner are also common in the province’s different regions.

Remembering the dead especially in the last Friday of the year is also among the ceremonies practiced among Iranians. On the last Thursday before the end of the year, Iranians observe the rite, remembering both dead and living. Women prepare special breads and halva to do charity in behalf of the dead.

In some cities women bake goulach and distribute it to the poor; light the candle and fire, and pay homage to the dead. When the sun sets in the same day, people convene in Mosques and light a candle to the memory of their dead.

The Turn of the Year

In the last moments of the old year, it is common to prepare ‘Seven S’s’ spread. It consists of different things starting with ‘S’ sound in Persian like coin, apple, sea-buckthorn berry, sumac, grass, garlic, and food prepared from germinated wheat (all these items have an ‘S’ in Persian). In most of the regions, people add to these ‘S’s’ a mirror, the holy Quran, water, sour orange, red fish, candle or lamp, local bread, dried fig, bean and peas and raisins, walnut, almond, rosewater, colored decorated eggs, fruits, halva, salt, and flowers.

The Norouz spread is usually spread in the guest house and receives guests until the end of holidays.

By the New Year coming, members of families gather around this Seven-spread then fathers of the families open Quran pages and give gifts of Eid to members, usually notes, formerly coins, however. This cash is calld ‘Eidi.’

Paying visits starts in early minutes and continues to the end of the holidays. It is common for the younger members of the family and tribe to visit the elders and congratulate the New Year’s Day. In some regions, men and women visit separately the family and kin.

13th of the first Iranian month, Farvardin (April 2) is usually the last day of New Year’s holidays. In that day, people go to picnic in the nature along the family. Local dishes are cooked including sabzi polo, tahchin, ash reshteh, ash anar, and other dishes for the day. Local games, chanting local songs and throwing the grass grown during 13 days into the desert or rivers are also common ceremonies of the day. They fasten ribbons around the grass with the belief in fulfilling the wishes.