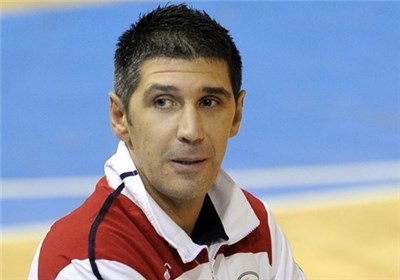 The Serbian coach met the Iranian volleyball officials at the airport in Istanbul on Monday.

“At the moment, I have three offers from the Italian good teams but I cannot afford to ignore Iran,” Kovac said.

“It is not easy to be replacement of Velasco. Expectations are high and we have a big responsibility ahead of us. Also, I have plenty of incentive to succeed with Iran volleyball team,” he added.

“Fortunately, I am familiar with the Iranians and it will help me a lot. Of course, I will ask my assistants for help. We should not waste the time and I will see the videos of the league to know more about Iran’s volleyball,” Kovac stated.

Kovac replaced Julio Velasco as Iran head coach and will take the helm of the team until the 2016 Olympic Games in Rio de Janeiro.

The 46-year-old has already played in the Iranian volleyball club Pegah Urmia in 2004-5.

He will begin his work from April.

Kovac has won a bronze medal at the 1996 Olympics in Atlanta as Yugoslavia player. He has also won a gold medal with the team at Sydney at the 2000 Summer Olympics at the age of 33.