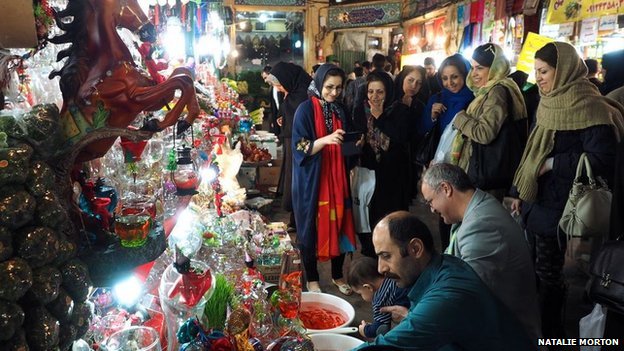 Four days in the teeming mega-metropolis of Tehran is not enough. But it was just enough to savour what’s long been special about this city.

There were also moments of surprise. And even a short stay was enough to appreciate the enduring centrality and sensitivity of Iran’s engagement with the wider world.

Elegant chinar trees still soar over Vali-e-Asr, the avenue reputed to be the longest in the Middle East, possibly the world. Sadly, there are fewer trees now, but their stately presence is still a lovely Tehran landmark.

The infamous traffic congestion seems much worse than on my last visit five years ago. Preparations for the much anticipated New Year (Nowruz) swells the slowly flowing streams. Travel time had to be factored in to every decision about where we would head next.

So does a delectable cuisine flecked with emerald dill or golden saffron.

And, wherever we went, Iranians stopped us with warm greetings in a wonderful testament to their enduring sense of hospitality.

In the spirit of Nowruz, with its “haft cinn” of seven symbols, these were seven surprises.

1. Hotel lobbies full of visitors, many from Asian countries. “Why are you here?” I ask the head of an Indian electronics company. “To take a look at the potential,” he replies. Is there much ? “A lot,” he declares.

2. The best of “Traditional English tea” (“By appointment to Her Majesty Queen Elizabeth”) in my room in a recently renovated hotel – and leading American soft drinks in the fridge.

3. The many shops selling well known Western fashion brands in wealthier north Tehran despite the vast web of international sanctions. Inventive Iranians have found ways around them.

4. The bazaars are bustling, and in places, bursting full of people and goods for sale. But many people lamented the high prices caused by sanctions. In some cases, they’ve tripled. Cheaper versions can be found on sale.

But some goods are in short supply, including spare parts and some much needed medicines. And government handouts to ease the suffering are being cut back which will also add to the hardship.

5. Tehran skies are dotted with construction cranes. Some Iranians, with access to hard currency and the right connections, have got even richer under sanctions. There seems to be the finances to build new apartments, but was told not many Iranians have funds to buy them.

6. The ferocity of the hardline backlash when Baroness Ashton, the EU’s Foreign Policy Chief, and the UN Secretary General Ban Ki-moon, put human rights on the agenda. Suspicion still runs deep that negotiations on Iran’s nuclear programme are a pretext to meddle in Iran. But the bravery of Iranian human rights activists, and the readiness of President Rouhani’s administration to begin to take the lead on human rights issues was also notable.

7. Everyone we met, whatever their political view, expressed a desire for wider engagement with the world, and a long term nuclear agreement that respected Iran and its interests. “We can’t live behind a long wall,” one man remarked, adding the West had to have “good intentions”.

The best expression I heard was that Iran now wants to find “its place in the world, not against the world”. Nationalism and pride are deeply-rooted here. There’s a confidence across the political spectrum about Iran’s rightful place in the region and beyond, but still heated argument over the best way to move forward.

I heard regret from young Iranians about “years lost”, and opportunities missed in a country where about 70% of the population is under the age of 35.

“I’ll never get those years back,” one 30-something young engineer told me. But, like most Iranians I met, he expressed hope that change would come.

Iranians of all ages are engaging with the world from a cyber distance, despite bans on satellite TV and social media sites like Facebook and Twitter. Even my posts on twitter were picked up and used in the reporting by hardline media.

As the Iranian New Year approaches, Iran hopes that, in the spirit of Nowruz, there will be new beginnings and blessings – in a nation like this, that will mean both change and continuity.

As we left Tehran, one of the hard drives on our computers was wiped of all its contents as we went through airport security. But, we had a back-up, and in our own memory, we won’t forget these four days in Tehran.