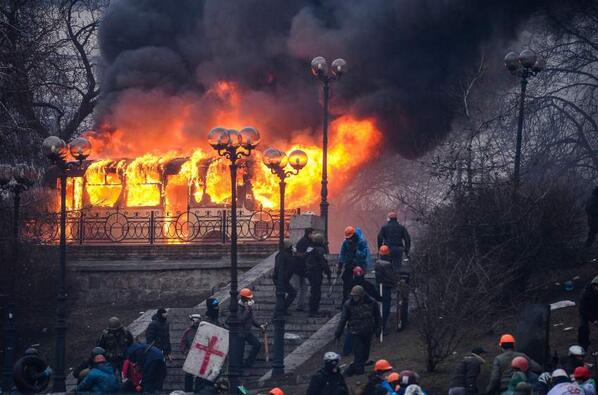 ILNA: Crimea’s self-defense forces on Wednesday stormed the Ukrainian navy headquarters in the Black Sea port of Sevastopol, taking possession without resistance a day after Russia signed a treaty with local authorities to annex the region.

An Associated Press photographer witnessed several hundred self-defense forces take down the gate and make their way onto the headquarters’ premises. They then raised the Russian flag on the square by the headquarters.

The unarmed Crimean self-defense forces waited for an hour on the square before the moved to storm the headquarters. Following the arrival of the commander of the Russian Black Sea fleet, the Crimeans took over the building while Ukrainian servicemen did not offer any resistance.

The AP photographer was able to enter the headquarters and saw the Crimean self-defense forces roaming around while the Ukrainian servicemen were packing up and leaving.

Russian President Vladimir Putin on Tuesday signed a treaty to incorporate Crimea into its territory following a referendum in which residents the strategic region overwhelmingly backed the move.

Jubilant crowds in Moscow and other cities across Russia hailed the annexation while Ukraine’s new government called the Russian president a threat to the “civilized world and international security,” and the U.S. and Europe threatened tougher sanctions against Moscow.

Russian news agencies on Wednesday quoted Valery Zorkin, chairman of the Russian Constitutional Courts, telling reporters that they have just ruled the treaty to be valid, thus clearing yet another hurdle for Russia to annex Crimea.

The treaty will now only need to be ratified by the Russian parliament.

A Ukrainian serviceman and a member of a local self-defense brigade were killed by gunfire in an incident in Crimea on Tuesday.

Thousands of Russian troops had overtaken Crimea two weeks before Sunday’s hastily called referendum, seizing some Ukrainian military bases, blockading others and pressuring Ukrainian soldiers to surrender their arms and leave. Putin insisted the Russian troops were in Crimea under a treaty with Ukraine that allows Russia to have up to 25,000 troops at its Black Sea fleet base in Crimea.

The West and Ukraine described the Crimean referendum as illegitimate and being held at gunpoint.

The United States and the European Union on Monday imposed sanctions on Russia, targeting Russian and Crimean officials with visa bans and asset freezes.