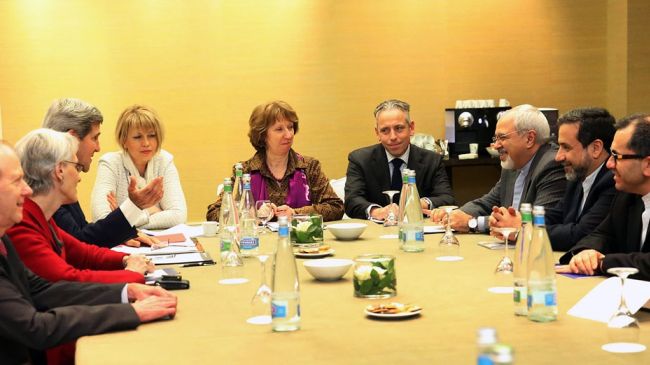 (Reuters) – Iran and six world powers will try to make headway toward resolving their nuclear dispute in talks starting in Vienna on Tuesday, with Western officials hoping the uphill challenge will not be made even more difficult by the Ukraine crisis.

So far, diplomats say, there is little sign that the worst East-West confrontation since the Cold War will undermine the quest for a deal to end the long standoff over Iran’s atomic activity and avert the threat of a Middle East war.

But unity among the powers on Iran may be tested in the meeting of their chief negotiators on the issue in the Austrian capital Vienna, with the four Western states and Russia at loggerheads over the future of Ukraine.

One Western envoy said there had been no apparent spillover from the Ukraine situation on expert level talks between Iran and the powers – the United States, France, Germany, Britain, China and Russia – held two weeks ago.

“We hope that will continue to be the case,” the diplomat said. That was echoed by a senior U.S. official, who said on Friday: “We all hope that the incredibly difficult situation in Ukraine will not create issues for this (Iran) negotiation.”

Since then, the United States and European Union have imposed sanctions including asset freezes and travel bans on some senior Russian and Ukrainian officials after Crimea applied to join Russia on Monday following a secession referendum.

Russia is expected to be represented at the talks – which are likely to end late on Wednesday – by Deputy Foreign Minister Sergey Ryabkov. European Union foreign policy chief Catherine Ashton will lead the negotiations on behalf of the powers.

Despite a concerted push to end the decade-old nuclear dispute after a relative moderate, Hassan Rouhani, was elected president last year on a platform to end Iran’s international isolation, big power divisions have reared their head before.

Russia and China only reluctantly supported four rounds of U.N. sanctions against Iran over its nuclear program between 2006 and 2010, and condemned subsequent U.S. and European sanctions that targeted the country’s lifeline oil exports.

Iran has long denied accusations from Western powers and Israel that it has sought to develop the capability to produce atomic weapons under the cover of its declared civilian nuclear energy program.

In November, Iran and the six powers struck an interim deal under which Tehran has since shelved higher-grade uranium enrichment – a potential path to atomic bombs – and obtained modest relief from punitive economic sanctions in return.

That six-month pact was designed to buy time for hammering out a final settlement by a July deadline, under which the West wants Iran to significantly scale back its nuclear program to deny it the capability to devise a nuclear weapon any time soon.

Iranian Foreign Minister Mohammad Javad Zarif, who will lead Tehran’s delegation, said he expects a trickier round of talks this week than the previous meeting in mid-February as the two sides try to iron out details such as Iran’s Arak heavy water reactor and levels of uranium enrichment.

Supreme Leader Ayatollah Ali Khamenei has granted the Iranian nuclear team “carte blanche” to provide guarantees to the West that the country’s nuclear program is peaceful, said a senior Iranian official who asked not to be named.

“But the red line is closure of any nuclear site and stopping enrichment,” the official said. “The talks are becoming more and more difficult because hardliners in Iran are watching any outcome very closely.” He was alluding to powerful conservatives in Iran’s security and clerical establishments deeply suspicious of Rouhani’s diplomatic opening to the West.

The senior U.S. administration official said: “We want to build on the work of our experts, narrow gaps, make tough policy decisions where there are sticking points.”

Refined uranium can fuel nuclear power plants, the stated goal of Iran’s nuclear activity, but can also provide fissile material for a bomb if enriched to a high degree, which the West fears may be Tehran’s ultimate, latent purpose.

The Islamic Republic has repeatedly ruled out closing down any of its nuclear plants. Its priority is to get sanctions that are squeezing its economy lifted.

Despite the diplomatic thaw, Iran has continued a longstanding effort to obtain components for its nuclear and missile programs banned by international sanctions, a senior U.S. official told Reuters.

A diplomat from one of the powers, who declined to be named, said it may be challenging to the keep the talks going in coming months without making specific decisions along the way, as nothing is to be agreed until everything is agreed.

The sides must overcome years of mutual and deep mistrust.

“There may be no progress for awhile but there may be surprises,” the diplomat said.