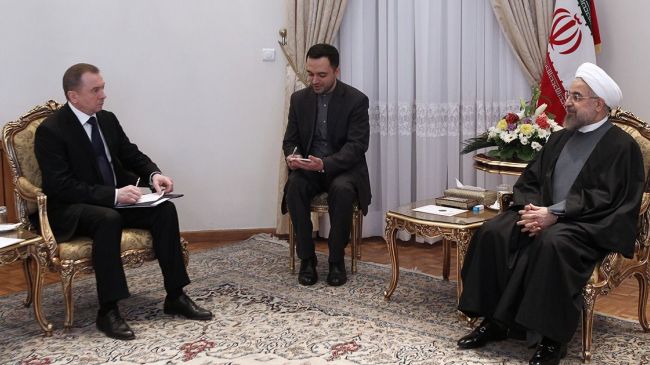 During a meeting with Belarusian Foreign Minister Vladimir Makey in Tehran on Monday evening, Rouhani pointed to Tehran-Minsk friendly, cordial and strong relations, and stressed the need to use the existing potentials between the two countries to enhance bilateral ties in diverse areas.

The Iranian president further praised the scientific and academic cooperation between Iran and Belarus, calling for further development of such ties.

Turning to Tehran’s nuclear energy program, Rouhani stated that Iran will continue to insist on its inalienable right to nuclear technology for peaceful purposes, and opposes any double standard when it comes to international conventions.

Makey, for his part, described the Islamic Republic of Iran as among the allies of Belarus, and voiced Minsk’s eagerness to forge closer ties with Tehran.

He further noted that Belarus is closely monitoring the negotiations between Iran and six world powers over the Islamic Republic’s nuclear issue, and supports Iran’s right to peaceful nuclear energy.

The Belarusian foreign minister also dismissed the West’s decade-old dispute over the Iranian nuclear energy program as groundless, noting that such a scenario is meant to deprive Iran of an influential role at the international stage.

Iran and the five permanent members of the United Nations Security Council — Russia, China, France, Britain, and the US — plus Germany are set to start their fresh round of talks over Tehran’s nuclear energy program in the Austrian capital of Vienna on Tuesday. The negotiations are expected to last until Wednesday.

The Tuesday morning session of the talks is said to be presided over by Iranian Foreign Minister Mohammad Javad Zarif and EU foreign policy chief Catherine Ashton, who represents the six countries. The talks will then continue at deputy level.

On Monday, Zarif said the new round of nuclear negotiations will focus on uranium enrichment and Arak heavy water reactor.