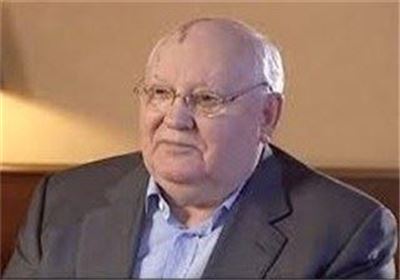 TEHRAN (Tasnim) – The people of Crimea fixed a Soviet-era mistake with the Sunday’s referendum and the will of the people should not be punished by sanctions, said former Soviet leader Mikhail Gorbachev.

“Earlier Crimea was merged with Ukraine under Soviet laws, to be more exact by the (Communist) party’s laws, without asking the people, and now the people have decided to correct that mistake. This should be welcomed instead of declaring sanctions,” he told Interfax on Monday.

Gorbachev praised the referendum, stating that it “reflects the aspirations of Crimea’s residents.”

He criticized the use of sanctions against Russia in retaliation to the referendum.

“To declare sanctions you need very serious reasons. And they must be upheld by the UN,” Gorbachev added. “The will of the people of the Crimea and the Crimea’s possible unification with Russia as a constituent region do not constitute such a reason.”

Over 96 percent of voters in the Crimean referendum held on Sunday answered ‘yes’ to the autonomous republic joining Russia and less than 4 percent of the vote participants want the region to remain part of Ukraine. The Crimean parliament also unanimously voted to integrate the region into Russia.

In the meantime the US, EU and Canada have already imposed new sanctions against Russia following the referendum.

The international observers who were present during the referendum made an official statement on Monday that the vote was free and conformed to international standards.

On Monday President Vladimir Putin has signed an order that Russia recognizes Crimea as a sovereign and independent state. “According to the will of the peoples of the Crimea on the all-Crimean referendum held on March 16, 2014, (I order) to recognize the Republic of Crimea, in which the city of Sevastopol has a special status, as a sovereign and independent state,” the document reads.

Crimea also addressed the UN seeking recognition as a sovereign state. “The Republic of Crimea intends to build its relations with other states on the basis of equality, peace, mutual neighborly cooperation, and other generally agreed principles of political, economic and cultural cooperation between states,” the parliament said.

Crimea has already officially introduced the ruble as a second currency along with the Ukrainian hryvna. On Monday the republic also created the Bank of Crimea and announced that all budget incomes, which up until now were being transferred to Kiev, will now be credited to the republic’s accounts. The dual currency will be in place for about six months.