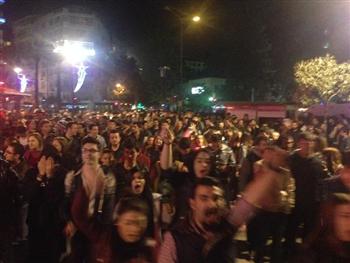 Police detain two women in İzmir, hours after Prime Minister Erdoğan complained of an “ugly” gesture directed at him before his election campaign rally.

Prime Minister Recep Tayyip Erdoğan, who stepped up his fiery rhetoric against his political opponents at his election campaign rally in İzmir, mentioned an incident that he witnessed after he arrived in the city with a helicopter today. Erdoğan said that while his motorcade was driving him to Gündoğdu Square for the rally, a bystander did a hand gesture at him.

“While I was coming here today, a woman in company of a man, presumably her husband, did such an ugly gesture that reflects what (main opposition Republican People’s Party) CHP is. The prime minister of the country is passing by and she’s doing that gesture with her hands and arms,” Erdoğan said. He continued: “You’re a lady, a woman… How come you do such a gesture? This is the CHP mentality. I could understand if it was a man, although he also shouldn’t do it, but I cannot comprehend how a woman does it.”

Soon after Erdoğan’s comments, two women were identified and detained, before being transferred to the police department to testify about the incident. According to the Turkish law, they can receive prison sentences for “insulting the statesmen and public officials.”

Ethem Coşkuner, a surgeon in the Black Sea town Trabzon, had received a suspended 10-month prison sentence in 2012 for insulting Erdoğan during a heated debate with an employee at his hospital.