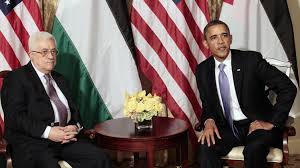 President Barack Obama will push to keep negotiations between Israel and the Palestinians alive past an end-of-April deadline when he meets today at the White House with Palestinian Authority President Mahmoud Abbas.

Palestinian resistance to a U.S. framework has been hardening, and clashes last week between Gaza militants and the Israeli military have heightened tensions. Meanwhile, the Russian power play inUkraine has absorbed U.S. attention.

“Three weeks ago, the consensus was, ‘Yes, they’ll find a way forward because no one really wants to walk away from this process,’” said Robert Danin, a senior fellow at the Council on Foreign Relations and a former State Department official. “Now, people are saying, ‘Well, maybe not.’”

The Palestinians are “digging in” over issues that include the description of Israel as the nation-state of the Jewish people, and Abbas hasn’t signaled what concessions he could accept in order to keep talking, Danin said. “The hope is Abbas may be willing to be more forthcoming with Obama than he has been with Kerry or in his public messaging so far.”

Abbas, 78, met with U.S. Secretary of State John Kerry yesterday in Washington. A Palestinian official, speaking anonymously because the talks are sensitive, said Abbas might extend the talks past an April 29 deadline if Israel frees more prisoners and halts settlement construction.

Kerry encourages Abbas “to make the tough decisions that will be necessary in the weeks ahead,” according to an account of the meeting e-mailed to reporters by the State Department.

Abbas said last week he expects “intensive discussions” with Obama and hasn’t given up on a U.S.-drafted framework for peace with Israel as negotiations approach their nine-month deadline. “We still hope to reach an actual achievement from the talks during the prescribed period,” Abbas said at a March 13 press conference.

The Palestinian leader is under pressure from members of his own Fatah party to abandon the negotiations and press for sanctions against Israel at the United Nations and other international bodies. Fatah’s Executive Committee issued a statement on March 12 opposing any extension to the negotiations mediated by Kerry.

While Mideast peace was an early goal of Obama’s presidency, efforts cooled until last year, when his visit to Israel was followed by Kerry’s campaign to restart talks. Last July, the sides agreed to talk for a nine-month period.

Kerry has been seeking support from Abbas and Israeli Prime Minister Benjamin Netanyahu for the framework, which would guide more talks over issues including borders, security, refugees, settlements, Jerusalem and recognition of Israel as the Jewish state. Obama met with Netanyahu on March 3.

Uncertainty about whether the Palestinians will agree to extend the talks has prompted Israelis to question going forward later this month with a scheduled release of Palestinian prisoners, including Arab Israelis, to fulfill the terms of last July’s deal to restart talks. Palestinians say talks can’t continue without the promised releases.

“While there is still a chance that a piece of paper will emerge, I don’t think it will be the breakthrough document Kerry was hoping for,” said Aaron David Miller, a former Mideast peace negotiator now at the Woodrow Wilson International Center for Scholars in Washington.

In any case, “Unless it’s met on the ground with real, tangible, concrete improvements to the Palestinian conditions on the ground, I think it’s going to be a tough sell.”

Kerry told a U.S. House Appropriations subcommittee on March 12 that the administration is seeking “some kind of understanding of the road forward.” He said, “the level of mistrust is as large as any level of mistrust I’ve ever seen, on both sides. Neither believes the other is really serious” or prepared to make major concessions.

Netanyahu, addressing the American Israel Public Affairs Committee in Washington earlier this month, said he was prepared to make peace if Palestinians recognize Israel as the national homeland of the Jewish people, while indicating Palestinians were the problem. “No excuses, no delays; it’s time,” he said.

Abbas spokesman Nabil Abu Rudeina called the overture a “waste of time” and accused Netanyahu of trying to sabotage talks.

Abbas has said he can’t recognize Israel as a Jewish state in part because one-fifth of its population is Arab and he is concerned that would forfeit the claims of millions of refugees whose families fled or were expelled by Israel when it was established in 1948.

Netanyahu called on the Palestinian president to “abandon the fantasy of flooding Israel with refugees.”

Netanyahu has often raised other conditions for signing a peace agreement, including a requirement that the new state be demilitarized with an Israeli army presence on its eastern border with Jordan. He has also said he doesn’t want to move any of the 350,000 West Bank settlers from their homes, a position Abbas rejects.

For Israel, Iran’s nuclear program has become a more pressing concern. The U.S. and five other world powers have a six-month agreement with Iran, to end in July, during which the Islamic Republic is supposed to freeze some of its nuclear program in exchange for relief from some sanctions. Israel has expressed skepticism about the negotiations.

Obama and Kerry, meanwhile, have diverted attention and resources to the crisis in Ukraine, after a Russian incursion into Crimea and yesterday’s referendum in the Black Sea peninsula to leave Ukraine and join Russia.

“The peace process is sandwiched in between the Ukraine and Iran, both of which are more important to this president right now,” Miller said. “And both of which make it hard for him to open up another front should he be inclined to do so to pressure Israel.”

Danin said getting Israelis and Palestinians to agree on how to go forward is “sufficiently hard on its own merits. How do you make impossible more impossible?”

At the same time, Danin said he “can’t see” Kerry walking away from the process given how invested he has become.

“The sense is, he’s just going to keep diluting the product to a point that all parties can hold their nose and move along with it. But the challenge is, under that scenario, what will keep the Palestinians in the game? What is going to incentivize them to not walk away?”