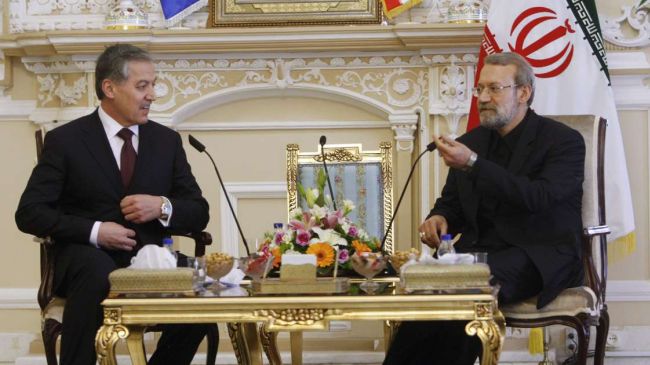 Iran’s Majlis speaker Ali Larijani has praised the Islamic Republic’s relations with Tajikistan, calling for further promotion of cooperation between the two countries.

In a meeting with Tajikistan’s Foreign Minister Sirojiddin Aslov in Tehran on Sunday, Larijani stressed the need to tap into all existing potential to enhance relations between Tehran and Dushanbe.

“Iran and Tajikistan enjoy great potentialities and opportunities for close cooperation and interaction, the exploitation of which can benefit both nations,” the Iranian Majlis speaker said.

Larijani further expressed Majlis’ support for the enhancement of bilateral ties with Dushanbe, saying that Iranian companies are willing to export technical and engineering services to Tajikistan and create the required infrastructure for further development in the Central Asian country.

Aslov, for his part, said his country attaches great importance to its relations with the Islamic Republic.

The Tajik official further hailed Iran’s experiences in various fields of economy, industry and technical and engineering services, and called for the exchange of experience between Tehran and Dushanbe in these sectors.

During a meeting with his Tajik counterpart Emomali Rahmon on the sidelines of the Shanghai Cooperation Organization summit in the Kyrgyz capital of Bishkek on September 13, 2013, Iranian President Hassan Rouhani stressed the expansion of the mutual relations and cooperation between the Islamic Republic and Tajikistan.

The two heads of state discussed ways of boosting relations between their countries.