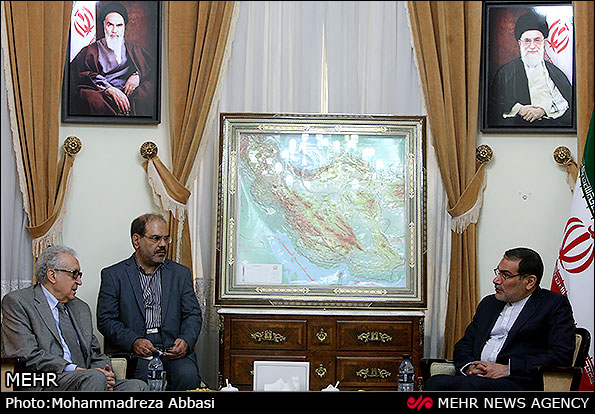 The SNSC secretary made the comment during a two-hour a meeting with the visiting UN-Arab League envoy for Syria Lakhdar Brahimi Sunday evening, reiterating the need for respecting the pivotal issue of the Syrian nationˈs demands in devising any plan for the political future of Syria.

Shamkhani in the meeting expressed strong worry about being influenced of the UN from the will of certain countries that are opposed to the restoration of stability in Syria, stressing the necessity of wise use of the potentials of the influential powers in establishment of peace and stability in Syria.

ˈThe fundamental stands of the Islamic Republic of Iran, which Tehran has stressed as of the beginning of the Syrian crisis has been dynamic support for and cooperation with all plans aimed at putting an end to the bloodshed, and the materializing of the Syrian peopleˈs demands,ˈ he reiterated.

The SNSC secretary said he was surprised that some countries are worried lest democracy would prevail and the peopleˈs choice would be respected in Syria.

Shamkhani criticized the double standards adopted by some powers regarding terrorism and stressed the necessity of the foreign countriesˈ refraining from interference aimed at changing the scene in Syria in a way to suit their interests, rather than the Syrian nationsˈ interests.

The SNSC secretary condemned the forwarding of weapons and ammunitions for the terrorist groups stationed in Syria and asked for the UN Security Council move against such moves that are against the regional and international security.

ˈThe US can also based on the demand of the international society act for provision of food and medicine for the oppressed and painful Syrian people,ˈ said Shamkhani.

The UN special envoy for Syria, too, expressed sorrow that the international efforts aimed at putting an end to the Syrian crisis have all been futile.

He said that achieving practical strategies that would work in restoration of peace and stability are in need of double-efforts and greater and closer cooperation of the countries that have influence in that countryˈs developments.

Lakhdar Brahimi meanwhile pointed out that Iran plays positive roles in the regional developments, especially in Syria, asking for Tehranˈs contribution to the UN efforts aimed at resolving the Syrian crisis and putting an end to the ongoing human catastrophe there.

Tens of thousands of people, including members of the security forces, have been killed, when some protest rallies turned into armed clashes.