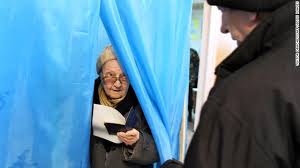 Reported by AFP, an overwhelming 95.5 percent of voters on the mostly Russian-speaking peninsula chose to secede from Ukraine, according to partial results from Sunday’s referendum, which the Kremlin is accused of orchestrating.

The European Union said the referendum was “illegal and illegitimate” and its outcome would not be recognised.

In Brussels on Monday, European foreign ministers are expected to unfurl sanctions including visa bans and asset freezes against leading figures in Moscow. However, members of the Russian government are not expected to be affected.

Crimea will formally apply to join Russia on Monday after voting to split from Ukraine as Europe prepared to hit Moscow with a wave of sanctions in the worst East-West stand-off since the Cold War.

US President Barack Obama phoned his Russian counterpart Vladimir Putin on Sunday and told him the vote “under duress of Russian military intervention, would never be recognised by the United States and the international community.”

The downfall of Yanukovych’s regime prompted Russia to move forces into Crimea, where pro-Moscow officials declared independence and hurriedly organised the referendum.

British Foreign Secretary William Hague called the vote a “mockery” of democracy while France’s Laurent Fabius criticised a referendum “that took place under the threat of Russian occupation forces.”

Tensions remained high in the mainly Russian-speaking southeast of Ukraine, where thousands rallied in the flashpoint industrial city of Donetsk and the town of Kharkiv to demand their own Crimea-style referendum.