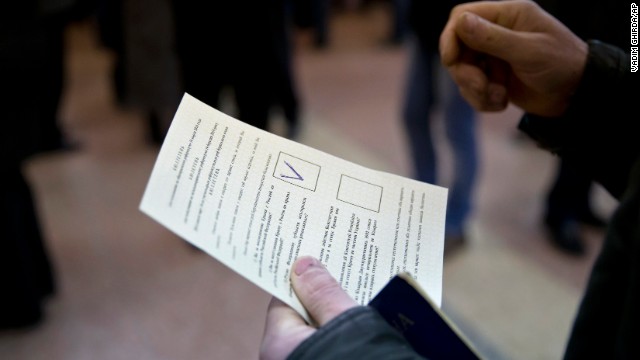 Crimea votes to break off from Ukraine, join Russia

(CNN) — An overwhelming 96.7% of Crimea residents voted to break off from Ukraine and join Russia, according to final results of a referendum that has put the United States and Russia on the kind of collision course not seen since the end of the Cold War.

Moscow strongly backed Sunday’s referendum in the Black Sea peninsula where the majority of the population is ethnic Russian.

The United States and the European Union considered it illegal. The EU said it’s looking at sanctions against Russia. The U.S. said it won’t recognize the outcome.

Mikhail Malyshev, the head of the Crimean Election Commission, announced the results in a news conference Monday. While he did not say 100% of the ballots had been counted, he did add, “The committee’s work is done.”

Russia welcomed the results, with lawmakers saying parliament will discuss the future of Crimea on Friday.

“All the necessary legislative decisions on the results of the referendum will be taken as soon as possible” said Sergey Neverov, the deputy speaker of the lower house of parliament in Russi.

“The referendum shows that the people of Crimea see their future as a part of Russia,” he added.