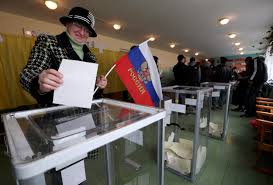 (Reuters) – A top Chinese diplomat repeated Beijing’s call for calm and restraint in Ukraine on Monday, but ducked comment on a referendum in Crimea after the region’s Moscow-backed leaders declared a 96-percent vote in favor of joining Russia.

Chinese Vice Foreign Minister Li Baodong, speaking to reporters ahead of a visit to Europe by President Xi Jinping later this month, said that a political settlement was the only way to resolve the Ukraine crisis.

“We are paying very close attention to the situation in Ukraine,” Li said, when asked about Crimea.

“We hope all parties can calmly maintain restraint to prevent the situation from further escalating and worsening. Political resolution and dialogue is the only way out.”

As state media in Russia carried a reminder of its power to turn the United States to “radioactive ash”, President Barack Obama spoke to Vladimir Putin, telling the Russian president that he and his European allies were ready to impose “additional costs” on Moscow for violating Ukraine’s territory.

China has said that it does not believe putting sanctions on Moscow – a close diplomatic ally and key economic partner – would be the best way to resolve the situation.

China has so far shown little public interest in becoming deeply involved diplomatically in Ukraine, in line with its low-key approach to many international crises.

But China has also said it would like to continue to develop “friendly cooperation” with Ukraine and that it respects Ukraine’s independence, sovereignty and territorial integrity.

Over the weekend, China abstained on a U.N. Security Council resolution, which Russia vetoed, that declared the Crimea referendum would have no validity.

China, which generally looks askance at the idea of referendums in contested regions lest it set a precedent for places like Tibet, has signaled it understands Russia’s position on Ukraine, saying what is happening there “has historical reasons”.

Influential Chinese tabloid the Global Times, published by the ruling Communist Party’s official People’s Daily, wrote in an editorial on Monday that what was happening in Ukraine was in essence “an anti-Russia colour revolution supported by the West”.

“The interference of the West in the Ukraine crisis has messed up the region and Russian was bound to respond,” it added.