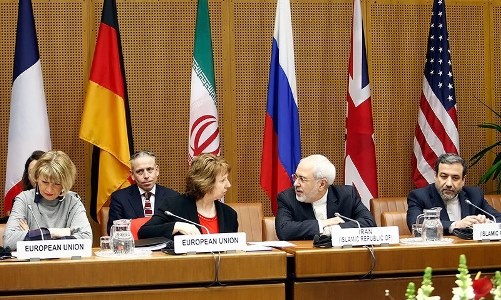 A compromise with Iran is possible, if it is not asked to surrender

In pursuit of a comprehensive and permanent agreement over Iran’s nuclear program, the next round of negotiations between Iran and P5+1 – the five permanent members of the United Nations Security Council plus Germany – will begin on Monday March 17 in Vienna, Austria. Despite strong pessimism before the start of the negotiations expressed by the usual nay-sayers, the previous round that took place in Vienna from February 18-20 was in a strongly positive atmosphere. Catherine Ashton, the European Union Foreign Policy Chief who leads the P5+1 negotiation team, alsohailed the progress between Iran and the International Atomic Energy Agency (IAEA) over inspections of Iran’s nuclear sites. Wendy Sherman, Undersecretary of State for Political Affairs who heads the U.S. delegation also admitted that Iran has kept its promises under the Geneva Accord, signed between the two sides last November.

But, despite the progress, those who settle for nothing short of a war with Iran have still been expressing pessimism, and have been trying to scuttle the negotiations. Israel, in particular, has been trying to “prove” that Iran is not trustworthy and has not changed its policies. In its latest effort, Israel has claimed that its navy has intercepted a shipment of Iranian weapons in international waters near a Sudanese port that had been intended for the Palestinian group Hamas in Gaza. The distance between Gaza and the Sudanese port is at least 1000 miles, and the road between the two passes through Egypt. The rockets that were displayed by Israel last Monday, allegedly sent by Iran, are 6-7 meter long and weigh close to a ton. How can they pass through Egypt, whose military dictatorship is an ardent foe of Iran, without being caught? How can they pass through the Sinai Desert without attracting any attention from Israelis? Unless we believe that Iran can successfully bribe a huge number of Egyptians, the allegations and the plan for getting the weapons to Gaza simply defy logic.

In another baseless report, Fredrik Dahl and Louis Charbonneau of Reuters claimed on February 27 that, “The U.N. nuclear watchdog planned a major report on Iran that might have revealed more of its suspected atomic bomb research, but held off as Tehran’s relations with the outside world thawed, sources familiar with the matter said.” The source was, as usual, anonymous, and the report did not make it clear what sort of “evidence” the IAEA had obtained other than claiming that the source suggested that the evidence was “more recent material concerned extra detail about alleged research and experiments that were covered in the November 2011 report. A new report would probably have included ‘updated information on PMD [possible military dimension (of Iran’s nuclear program)]’ which could have ‘reinforced the concern’ about Iran.” That report was criticized widely, and completely deconstructed.

Even if some raw evidence did exist, Dahl and Charbonneau did not even consider the possibility that the IAEA did not report it because the evidence was not credible. Of course, Israel quickly demanded that the IAEA release the report. In fact, the IAEA denied the Reuters report.

In order to justify their pessimism on the possibility that an agreement with Iran can be reached, some of the hawks point to what the Iranian hardliners have been saying. For example, between the signing of the Geneva Accord and the beginning of the new round of negotiations in Vienna in February, Iran’s Supreme Leader Ayatollah Ali Khamenei expressed his lack of hope for the negotiations to succeed. In particular, on February 17 Khamenei said that although he supports the nuclear negotiations, he does not believe that the negotiations with the US”will go anywhere.” The mainstream media in the US, the hawks and the Israel lobby that are looking for any excuse to scuttle the diplomatic process, quickly interpreted Khamenei’s speech as indicating his unwillingness to compromise. But, is Khamenei really interested in resolving the dispute diplomatically, and what is an acceptable compromise, anyway?

First of all, as far back as 21 March 2013, when Khamenei signaled a change in his position regarding negotiations with the United States, he has consistently said the same thing and, thus, there was nothing new in his last month’s declaration. But, he has always meant the negotiations about reestablishing diplomatic relations between the two nations, not the nuclear negotiations. This was recently confirmed by Ali Larijani, Speaker of the Majles, the Iranian parliament, who is very close to Khamenei.

Second, former Defense Minister Mohammad Forouzandeh was reported sayingseveral weeks ago that the nezaam – the state, as is called in Iran – has decided to “close the nuclear file” by reaching an agreement with the West. Forouzandeh, an appointee of Khamenei, heads the Foundation of the Oppressed and Disabled, the second-largest commercial enterprise in Iran. He is also an appointee of Khamenei to the Expediency Discernment Council, a constitutional body that arbitrates dispute between the Majles and the powerful Guardian Council that must approve all the laws passed by the Majles and also provides Khamenei advice on important national issues, and is very close to the Supreme Leader. Forouzandeh likened the decision to the decision in July 1988 by Ayatollah Ruhollah Khomeini, founder of the Islamic Republic, to accept Resolution 598 of the UNSC that had called for ceasefire between Iran and Iraq, and end the bloody eight-year war.

But, why does Khamenei even make such statements? The reason is twofold. One is that his hardline supporters oppose the negotiations. Some do so for ideological reasons. They do not trust the United States, and are afraid that President Hassan Rouhani and his Foreign Minister Mohammad Javad Zarif will make too many concessions. Others oppose the negotiations because they gained their political and economic power as a result of the hostility between the two nations, and are afraid that if the negotiations succeed, they will lose everything. Thus, in order to control such hardliners, Khamenei must appear resolute at home. The second reason is that Khamenei is trying to create a political cover for himself and his authority, in case the negotiations fail, because he wants to be able to declare then that “I told you so.” Thus, his negative view of the negotiations with the US is mostly for his domestic audience, as well as his own authority.

US officials have also been trying to appear tough, in order for President Obama to control his critics at home. Wendy Sherman, in particular, appears to go out of her way to upset and insult Iranian officials and people. After saying last October that “deception is part of the Iranian leadership DNA,” she also told the Senate Foreign Relations Committee on February 4 that “We know that Iran does not need to have an underground, fortified enrichment facility like Fordow … [or] a heavy-water reactor at Arak to have a peaceful nuclear program.” Even if this were true, should this not be agreed upon as a result of the negotiations? After all, the Fordow site and the incomplete reactor in Arak are Iran’s two winning aces, which it will not give up, if ever, without extracting major concessions. As expected, Sherman’s remark angered Zarif who quickly rejected her assertions. But, such remarks also gave an excuse to Iranian hardliners to once again stage fierce attacks on the Rouhani administration. Secretary of State John Kerry has also threatened that if Iran breaches its obligations, “the military option is still on the table.” Former Foreign Minister and current senior foreign policy adviser to Khamenei, Ali Akbar Velayati, called the threat “a bluff.”

Thus, all indications are that Iran is ready and willing to compromise. Regarding the Arak heavy-water research reactor that is to replace the aging Tehran Research Reactor (TRR) and, when operational, it will produce plutonium that can be used for making nuclear weapons, former Foreign Minister and current head of the Atomic Energy Organization of Iran, Ali Akbar Salehi, said on February 6 that Iran is to “modify the Arak reactor” in order to allay the Western concerns. A reliable source told the author that Salehi’s remark means a smaller and better safeguarded reactor that would produce much less plutonium and will take much longer to do so. After all, for the purpose of nuclear research and production of medical isotopes for Iranian patients, the 40 MW Arak reactor is somewhat large – the TRR is only a 5 MW reactor. In addition, Iran may be willing to negotiate an arrangement similar to what it has for its 1000 MW light-water reactor in Bushehr, namely, shipping out the spent fuel (Russia takes the delivery of the Bushehr’s spent fuel). Its design may be modified to strengthen nonproliferation and, hence, maximize its potential for producing medical isotopes. In return, Iran may also agree to allow permanently-stationed IAEA inspectors at the site.

But, there is no realistic possibility that Iran will give up the Arak reactor altogether after investing heavily in Iran, not to mention the fact that it considers the reactor a cause for national pride, as every aspect of its design and work has been done by Iranian experts. But, this has also generated concerns regarding its safety. Thus, as an incentive, Iran should be offered expert help, modern equipment and instruments, and fuel for the reactor (natural uranium), in return for the reactor’s strict safeguard by the IAEA.

As for Fordow enrichment site, there is little, if any chance that Iran will be willing to dismantle it. The site was built under a mountain at the height of military threats against Iran’s nuclear infrastructure as an “insurance policy” that would protect Iran’s ability to enrichment uranium, in case the more vulnerable Natanz facility is destroyed by bombardment. It is considered almost a “sacred site.” But, here too, Iran has indicated its willingness to compromise. It has stopped enriching uranium at 19.75 percent at the site, and although it has transferred there all the 2976 centrifuges that it intends to use at Fordow, only 744 of them are operational. Thus, Iran may agree to reduce greatly the number of centrifuges operating there, and couple that with intrusive inspections by the IAEA, which should be plenty enough to allay any concern that the US and its allies have.

As a result of the Sa’dabad Declaration of October 2003 and the Paris Agreement of November 2004, Iran agreed, in addition to suspending its nuclear program, to sign the Additional Protocol of its Safeguards Agreement with the IAEA and implement its provisions on a volunteer basis, until the Majles ratified its signing. It did so until February 2006, but because the European Union reneged on its promises to Iran in return for its great concessions, Iran stopped implementing the Additional Protocol. The agreement between Iran and the IAEA that was signed last November means that Iran is effectively carrying out most, if not all, the provisions of the Protocol: more inspections, more transparency, and more data and information about the past activities.

Iran will not, however, agree to officially ratify the Protocol before the sanctions are lifted permanently. In other words, Iran is willing to make important, but reversible, concessions, but will make them permanent only if the US also takes irreversible steps toward ending its economic sanctions permanently. Thus, for example, President Obama cannot offer Iran temporary waiver of the sanctions, but expect permanent and irreversible concessions from Iran.

As the author has emphasized repeatedly – here, here, here, and here – if Washington is interested in the diplomatic resolution of the dispute with Iran, which in turn will have a tremendously positive effect on peace and stability in the Middle East, it should recognize the Rouhani administration’s domestic constraints, and offer compromises that President Rouhani can take home and demonstrate to his nation, including the hardliners, that diplomacy with the US can work.