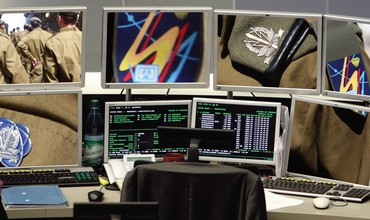 TEHRAN (FNA)- IT safety experts discovered an American trace in the hacking attacks on the website of the Crimean plebiscite.

This comes after Crimea reported a massive wave of hacker attacks on the websites linked to the ongoing referendum, Voice of Russia reported.

“A new wave of a massive D-Dos attack hit our site at 1 o’clock pm last night,” the organizers of the Crimean referendum have just reported.

“Our IT safety experts managed to find out where those attacks came from. It is University of Illinois at Urbana Champaign. The most powerful scanning of servers before the attack was carried out exactly from there.”

It is significant that Urbana, Champaign, with a population of 37,000, has the highest number of subnets with IP addresses. Let’s take for example subnet 192.17.0.0 – 192.17. 255.255 whose range makes it possible to offer approximately 500 IP to each citizen, and there are at least five such subnets in the city.

In other words, the technological and technical potentialities of this city exceed by thousands of times the needs of its residents.

Besides, there are three airports in Urbana. There is no official information about the location of military bases on its territory, but there signs that one of the headquarters of the National Security Agency is situated there.