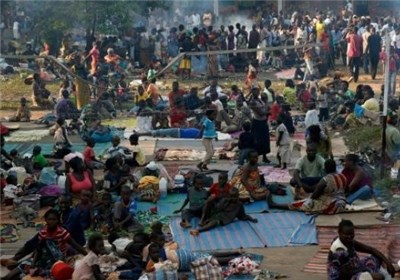 The aid weighs 40 tons was sent to the Republic of Chad via a specific flight.

The shipment includes tents, blankets and food stuff to be distributed among displaced Central Africans in their camps.

The UN officials and international aid agencies have frequently raised concerns over killing and displacing large crowds of Muslims in the region and lack of providing required financial sources to the Africans.

The UN High Commissioner for Refugees (UNHCR) said ongoing violence has pushed most Muslims out of the western side of the country.

According to the UN, more than 950,000 people have been displaced and thousands more killed.

The atrocities take place despite the intervention of French troops in the former colony.

On December 5, 2013, France invaded the CAR after the UN Security Council adopted a resolution giving the African Union and France the go-ahead to send troops to the country.

Many believe the French troops, known as the Sangaris, turn a blind eye to Christian militia, an accusation Paris rejects.

There are many mineral resources, including gold and diamond, in the Central African Republic. However, the country is extremely poor and has faced a series of rebellions and coups since it gained independence in 1960.