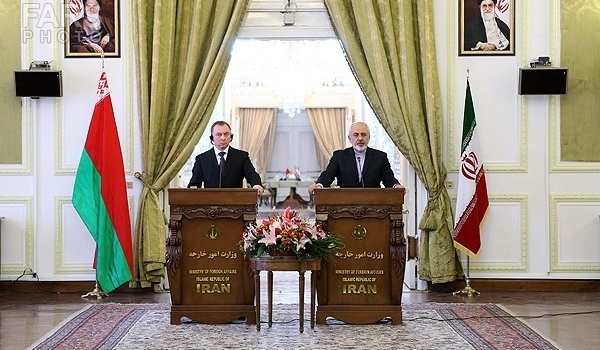 TEHRAN (FNA)- Iranian Foreign Minister Mohammad Javad Zarif underlined that the upcoming talks between Iran and the Group 5+1 (the US, Russia, China, Britain and France plus Germany) will only focus on technical issues and international nuclear cooperation.

“During the upcoming negotiations in Vienna on Tuesday, we will talk about uranium enrichment and Arak heavy water,” Zarif said after his meeting with his Belarus counterpart Vladimir Makey in Tehran on Sunday.

He underlined that international cooperation in the field of the civilian nuclear technology which is part of the G5+1’s commitments under the Geneva nuclear deal and also under clause 2 of Article 4 of the non-proliferation treaty (NPT) as well as removal of sanctions are among the issues to be discussed in the Vienna meeting.

Zarif said that the talks will be held at the level of deputy foreign ministers, but he and EU foreign policy chief Catherine Ashton will supervise the talks.

On November 24, Iran and the five permanent United Nations Security Council members plus Germany sealed a six-month Joint Plan of Action to lay the groundwork for the full resolution of the West’s decade-old dispute with Iran over the latter’s nuclear energy program.

Iran and the six world powers had an expert meeting in Vienna, Austria, on December 9. The negotiations were scheduled to continue until December 13, but the Iranian negotiators cut short the talks and returned home in protest at the US breach of the Geneva agreement by blacklisting a dozen companies and individuals for evading Washington’s sanctions.

After that US Secretary of State John Kerry tried to soothe Tehran’s anger over Washington’s fresh sanctions in a phone call to Zarif. Then, the experts meetings continued and yielded results. The two sides agreed on January 20 as the date for starting implementation of the interim nuclear deal.

Eventually on January 20, a confidential report by the International Atomic Energy Agency (IAEA) said that Iran has halted its 20-percent enrichment activity under the Geneva deal. Hours later the US and the EU removed part of their sanctions against Tehran.

Late in February, the UN nuclear watchdog agency, IAEA, announced that Iran is complying with its obligations under the Geneva nuclear deal.

In its new report, the IAEA said 20-percent uranium enrichment “is no longer taking place” by Iran as agreed in an agreement with the six world powers.

It confirmed that no additional uranium enrichment centrifuges have been installed at Iran’s Natanz and Fordo nuclear facilities. The report added that Iran has also provided the IAEA with an updated Design Information Questionnaire (DIQ) for the facility in Arak.

The February report of the IAEA came as Iran and the G5+1 held three days of talks headed by Zarif and EU Foreign Policy Chief Catherine Ashton from February 18-20.

Zarif’s talks with Ashton focused on finding a lasting solution to the nuclear standoff between the two sides. Both the top diplomats voiced satisfaction in their negotiations, and announced that they would start a fresh round of talks in Vienna on March 17 to achieve a comprehensive and permanent deal.