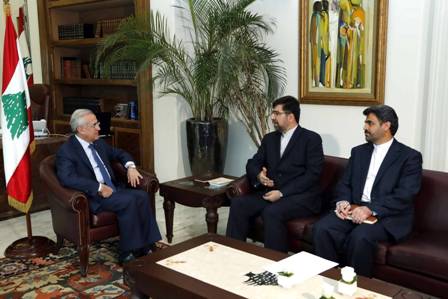 In a statement, Suleiman said he had met with Iranian Ambassador to Lebanon Ghazanfar Roknabadi to express Lebanon’s keenness to establish solid relations with Iran based on mutual interest and respect.

“Channels of bilateral communication can resolve such differences when they occur,” he added.

Machnouk’s remarks did not “reflect the state’s official position,” the president said.

Earlier in the day, Roknabadi said he had submitted an official complaint to Prime Minister Tammam Salam on Friday over Machnouk’s remarks, which the latter made at an Arab interior ministers’ meeting in the Moroccan city of Marrakesh earlier this week.

In a speech, Machnouk had blamed “Iranian interference” for a wave of recent violence in Lebanon.

“Political and strategic reasons for the violent phenomenon derive from Iranian and Syrian interference in Lebanon – not just now, but for more than three decades,” Machnouk claimed.

Lebanon, facing an increasingly precarious security situation, has seen a total of ten bombings since last August, two of which targeted Iranian diplomatic missions in Beirut.

Last November, an attack on the Iranian embassy killed 24 people, including the Iranian culture attaché.

Most attacks have targeted strongholds of the Iran-backed Hezbollah group, whose involvement in the Syrian conflict next door has drawn condemnation from Sunni-Muslim quarters both inside and outside Lebanon.