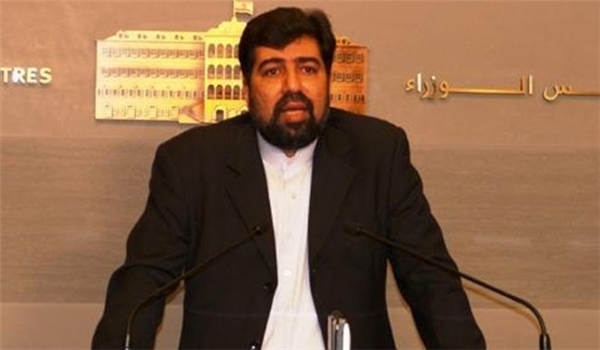 TEHRAN (FNA)- Iranian Ambassador to Beirut Qazanfar Roknabadi strongly criticized Lebanese Interior Minister Nouhad Machnouk over his remarks during which he blamed “Syrian and Iranian interference in Lebanon’s internal affairs” for a wave of violence that has hit the country in recent months.

Roknabadi submitted Friday an official complaint to Prime Minister Tamam Salam over Machnouk’s comments which were made during the Arab interior ministers gathering in Southern Morocco’s Marakesh earlier this week.

The Iranian ambassador said that Salam assured him that Machnouk’s statement does not reflect the position of the Lebanese government.

Machnouk was quoted as saying that “we know that the political and strategic reasons behind the phenomenon of violence stem from Iranian and Syrian interference in Lebanon’s interior, not just now but for the last three decades.