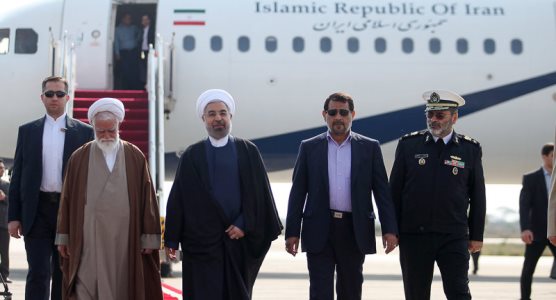 President Rouhani arrived in Muscat Wednesday morning on his first visit to the country since he took office as Iran’s president.

He was also officially welcomed by Omani Sultan Qaboos at Al Alam palace.

During his two-day stay in Oman, Rouhani and Omani officials discussed a variety of issues including expansion of bilateral ties and the most important regional and international developments.

The foreign minister, oil minister, minister of road and urban development, minister of labor and social welfare, head of Cultural Heritage, Handicrafts and Tourism Organization, head of Department of Environment, governor of Central Bank of Iran, IRNA managing director and a number of senior officials were accompanying the president during his Muscat trip.

Rouhani said that his Muscat visit was in response to earlier trip by Omanˈs Sultan Qaboos bin Said to Tehran.

The Omani Sultan Qaboos paid an official visit to Iran in later August 2013 soon after Rouhani was elected as Iran’s president.