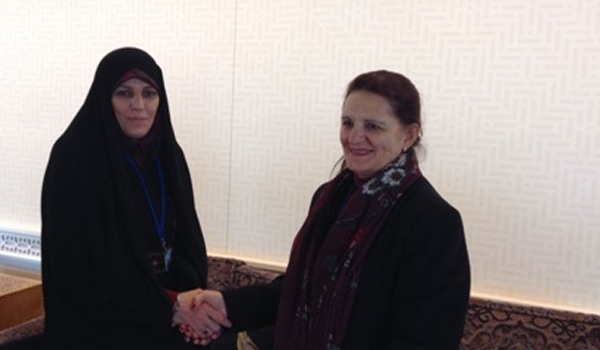 TEHRAN (FNA)- Iranian and Brazilian officials in a meeting in New York conferred on ways to increase cooperation between the two countries on women and family affairs.

The meeting was held between Iranian Vice-President for Women and Family Affairs Shahindokht Mowlaverdi and Executive Secretary of the Secretariat of Public Policies for Women of the Presidency of the Republic of Brazil Maria Bandeira on the sidelines of the 58th session of Women Status Commission in New York on Thursday.

During the meeting, Mowlaverdi said that the meeting will prepare the ground for bilateral ties in the field of women and family.

She said the Iranian government is ready to sign agreement with Brazil for mutual cooperation on family and women affairs.

On Wednesday, UN Undersecretary-General for Gender Equality and the Empowerment of Women Phumzile Mlambo-Ngcuka lauded Iran for its remarkable achievements in women education, specially higher education.

“Iran can be introduced as the role model of women education to the world, given its achievements in this field,” Mlambo, also Executive Director of UN-Women, said in a meeting with Mowlaverdi.

Mowlaverdi left Tehran for New York on Saturday to attend the 58th session of the United Nations Commission on the Status of Women.

The Iranian official is accompanied with two members of the Iranian parliament.

The gathering has been underway since March 10 and will end on March 21.

The event is to review challenges and achievements in the implementation of the Millennium Development Goals for women and girls.

Mowlaverdi addressed the UN commission on Monday on how wars, armed struggles and sanctions have affected the lives of women and children.

She also stressed the need for a collective cooperation to improve women status worldwide.