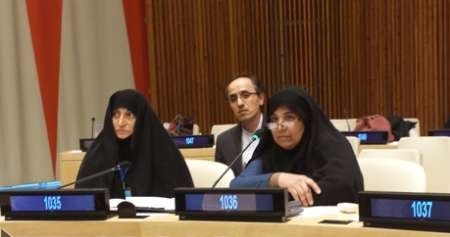 New York, March 13, IRNA – Iranian parliamentary delegation departed for Tehran Wednesday night at the end of a visit to New York during which they attended the 58th session of the Commission on the Status of Women in New York.

The Iranian delegation was headed by Vice-President for Women and Family Affairs Shahindokht Molaverdi. She was accompanied by two female members of the Iranian parliament (Majlis) Halimeh Aali and Laleh Eftekhari.

On the sidelines of the UN session on women, an annual parliamentary gathering was also held hosted by the Inter-Parliamentary Union and the United Nations Entity for Gender Equality and the Empowerment of Women (UN Women).

While in New York, members of the Iranian delegation held separate meetings with parliamentarians of Mexico, Indonesia, Sudan and Gambia as well as the vice-president of the Italian Senate and the Indonesian minister of Women’s empowerment and child protection.

The meetings were focused on discussing different issues related to women, particularly the situation of women in Iran.

Asked why Iran has not joined the Convention on the Elimination of All Forms of Discrimination against Women adopted by the UN General Assembly in 1979, the Iranian parliamentarian Laleh Eftekhari said the Islamic rules are more complete than the Convention and they are also more convenient for women.

She said the US has not joint the 1979 UN Convention either.