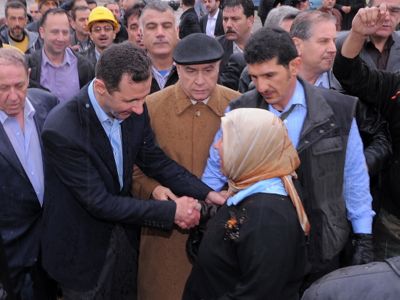 “President Assad is touring shelters for the displaced… and listening to their needs,” it added.

The official SANA news agency said Assad was visiting people in Adra, northeast of the capital.

The town is considered a strategic gateway to Damascus and has seen frequent clashes between the army and rebels.

Control of the town and its adjacent industrial park remain contested, the Syrian Observatory for Human Rights said.

Assad rarely makes public appearances and most of those have been within the confines of the capital.

He was last reported at a public event in January, when he attended prayers at a Damascus mosque.

Assad is expected to seek a new term in a presidential election planned for the middle of the year, despite the raging conflict which has killed more than 140,000 people since March 2011.