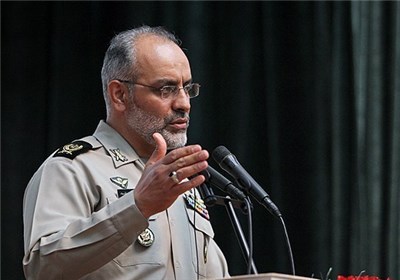 TEHRAN (Tasnim) – Iranian president’s adjutant General Hossein Valivand made a firm response to the US officials’ threatening rhetoric against Iran, stressing that the Army is fully prepared to fulfill its inherent duty to safeguard the country.

“The Army’s inherent duty is to protect the territorial, aerial and maritime boundaries against any kind of threat,” Valivand told the Tasnim News Agency on Wednesday.

“We will naturally do our inherent duty and will not tangle with the political issues,” he stated.

He also reassured the Iranian nation that the country’s Army will deliver a stunning performance in case of any possible threat.

The remarks by the Iranian military officer came days after the US president, in an interview with Bloomberg news network on March 2, said he believes that when US officials threaten Iran by saying, “all options are on the table,” the Iranians “take it seriously.”

Obama also referred to the presence of US troops in the region, saying “We have a high degree of confidence that when they (Iranians) look at 35,000 US military personnel in the region that are engaged in constant training exercises under the direction of a president who already has shown himself willing to take military action in the past, that they should take my statements seriously,” he said.

In recent weeks, senior American officials, including Obama and Secretary of State John Kerry, have time and again repeated the idea of military option still being on the table.

Iran’s high-ranking officials have slammed the tone and described threatening the Iranian nation with the military option as a grave mistake.