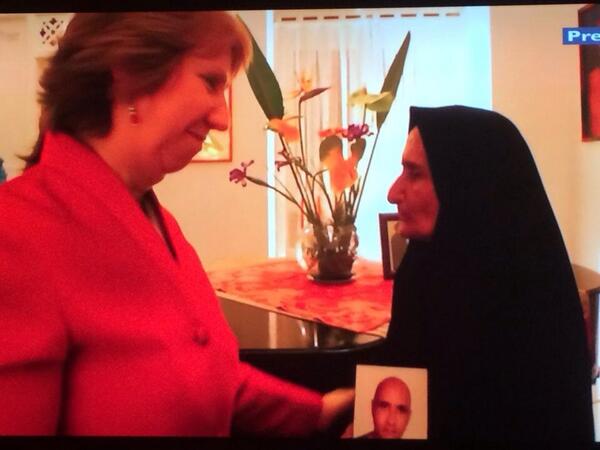 EU’s Ashton sparks controversy in Iran for meeting with women

TEHRAN — The highest-level European diplomatic visit to Iran in six years has ended, but controversy remained Tuesday about the European Union envoy’s meeting with a pair of women activists.

Political conservatives have lashed out at the meeting involving Catherine Ashton, the EU’s foreign policy chief, and two women closely identified with the opposition.

The dispute has put Iran’s foreign minister, Mohammad Javad Zarif, on the defensive just days before the scheduled resumption of sensitive nuclear negotiations between Iran and world powers. It was Zarif who invited Ashton, a key figure in the nuclear talks slated to resume in Vienna on Monday, to visit Iran.

Ashton arrived in Tehran on Saturday and and left the country on Monday in a whirlwind trip that was hailed by moderates as a potential breakthrough in long-strained diplomatic relations between Iran and the West.

During her time in Iran, Ashton held a joint press conference with Zarif and also met with President Hassan Rouhani, among other high-ranking dignitaries.

In the aftermath of her visit, however, conservatives were furious that Ashton also met with Narges Mohammadi, a prominent human rights activist who was jailed in 2011, and Gowhar Eshqi, the mother of a dissident blogger who died in police custody in 2012. The pair were among a number of Iranian women who met with Ashton on Saturday evening in the Austrian ambassador’s residence in Tehran.

Decrying the meeting as improper, some conservative commentators said it signaled western nations’ intention to bring contentious issues such as human rights to the table in the upcoming nuclear negotiations. Many Iranian conservatives are wary of the talks and of Rouhani’s diplomatic overtures to the west.

The Iranian government is sensitive about what it views as foreign “meddling” in its human rights record. Many officials regard western criticisms of the nation’s human rights practices as a pretext meant to undermine the Islamic Republic.

On Tuesday, Iran’s Foreign Ministry spokeswoman, Marziyeh Afkham, labeled Ashton’s meeting with the two women an “undiplomatic action.” At the regular weekly news conference, the spokeswoman said the ministry had not coordinated or arranged the encounter. Iran formally expressed its displeasure to Austria’s envoys, the spokeswoman said.

Also, a group of more than 20 conservative parliamentarians summoned Iran’s intelligence chief, Mahmud Alavi, to quiz him about the matter, the semi-official Fars news agency reported. The officials wanted to know why the meeting was allowed.

A number of students are planning a protest Wednesday outside the Austrian embassy, reported the Nasim news agency.

Kazem Sadighi, a Friday prayer leader in Tehran, was quoted in Fars saying: “Such meetings make people upset and dissatisfied.”

Ashton’s spokesman, Michael Mann, said via email that the EU envoy “wanted to meet a group of women activists during her visit to Iran.” The timing was “particularly pertinent,” Mann said, as Saturday was also International Women’s Day.

“Human rights is a key part of the EU’s foreign policy and our view on the situation in Iran is well-known,” Mann wrote. “[Ashton] always makes a point of seeing civil society, in particular women’s groups, on her journeys abroad.”