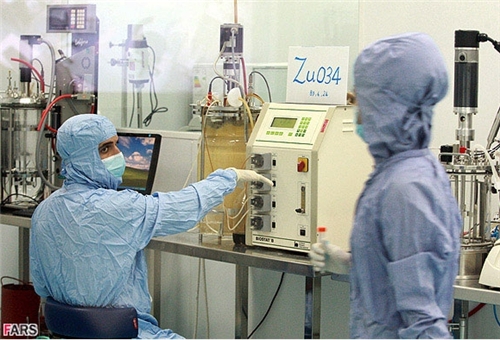 TEHRAN (FNA)- Iran gained self-sufficiency in producing blood factor 7 products – used to treat hemophilia disease – and MS drugs, an official announced in July, adding that the country has also managed to produce a new type of hi-tech anti-cancer drug and the raw material for penicillin G.

“The production line of a new hi-tech anti-cancer drug named Docetaxel will be inaugurated in Iran next Saturday which has applications in treating different types of cancer,” Deputy Head of Iran’s Food and Drug Organization Shams Ali Rezazadeh told FNA in July.

He also announced Iran’s self-sufficiency in the production of factor 7 and the medicines needed for treating multiple sclerosis (MS) patients.

“The raw material for penicillin G is also being mass-produced for the first time in the country,” Rezazadeh said.

In February, the Atomic Energy Organization of Iran (AEOI) Chief Fereidoun Abbasi announced that Iran is due to unveil 8 new radiomedicines with applications for diagnosis, prevention and treatment of a number of diseases.

“We have produced a number of radiomedicines before, and at present we have 5 new radiomedicines under production,” Abbasi said at a ceremony in Tehran at the time.